Proper use of fire extinguishers 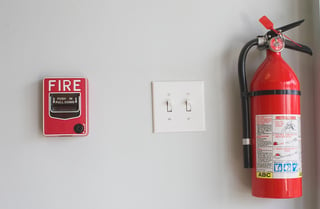 While on a site visit in downtown Milwaukee, a West Bend loss prevention associate recognized a fire extinguisher in a restaurant kitchen indicating it had been discharged. This was puzzling because the fire extinguisher had been serviced only a few weeks before. After questioning the manager, a startling discovery was made. In a well-intentioned attempt to test the effectiveness of the newly-inspected fire extinguisher, the manager had taken the canister outside and discharged it. It quickly became clear this process was followed for every fire extinguisher within the facility! If a real fire had broken out in the building, there would have been no viable options for containing the flames because all of the extinguishers had been depressurized.

The Numbers Don’t Lie
According to the U.S. Fire Administration, the leading causes of fires in nonresidential buildings*in 2015 were:

Understanding the Annual Maintenance of Fire Extinguishers
Kenny Asselin, captain of fire prevention for the West Bend Fire Department, tells us, “The biggest problem the fire inspectors run into is that people don’t know how the code reads as far as fire extinguisher maintenance.” Here’s what chapter 13 of the National Fire Protection Association Fire Code (NFPA 1) says regarding the annual maintenance of fire extinguishers:

NFPA 1:13.6.9.3.1.1 – Fire extinguishers shall be subjected to maintenance at intervals of not more than 1 year, at the time of hydrostatic test, or when specifically indicated by an inspection or electronic notification. [10:7.3.1.1.1] (The brackets reference chapter 7 of NFPA 10 which is the code for fire extinguishers.  NFPA 1 is adopted by reference as the fire code in the State of Wisconsin.)

NFPA 1 goes a little further implying they should be serviced by a company.  Here’s how that chapter reads:

It’s safe to say, if fire extinguish systems are in place and staff are properly trained on how to use fire extinguishers, both lives and money may be saved.  As a business owner or manager, ensure that your staff is prepared to respond safely and efficiently should a fire ignite in your facility.  Do you have an emergency action plan set in place?  If not, make it a priority today.

*Deaths and injuries by individual causes are not reported by the USFA, as small numbers of nonresidential building casualties are reported to the NFIRS, and a large number of the fires that caused these casualties have insufficient information to determine fire cause.