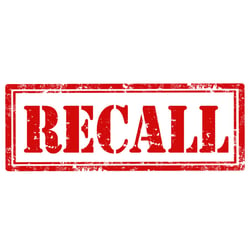 Staying up-to-date with product recalls can keep you, your family, and your business safe. Today we're going to take a look at a great online resource from the U.S. Government and a brief history of the ten worst product recalls.

Visit the website to see if any products you use are shown on the recall list. You can find the categories by clicking on the red circle labeled Recent Recalls.

This is TIME Magazine’s list of the top-ten most prominent product recalls in history: