Throwback to a Foggy Morning

While one of our associates, Jim, was out exercising on the prairie one summer morning, he snapped this gorgeous photo. He shared, "I think what appears to be a layer of fog was actually solid mosquitoes!" Yikes! 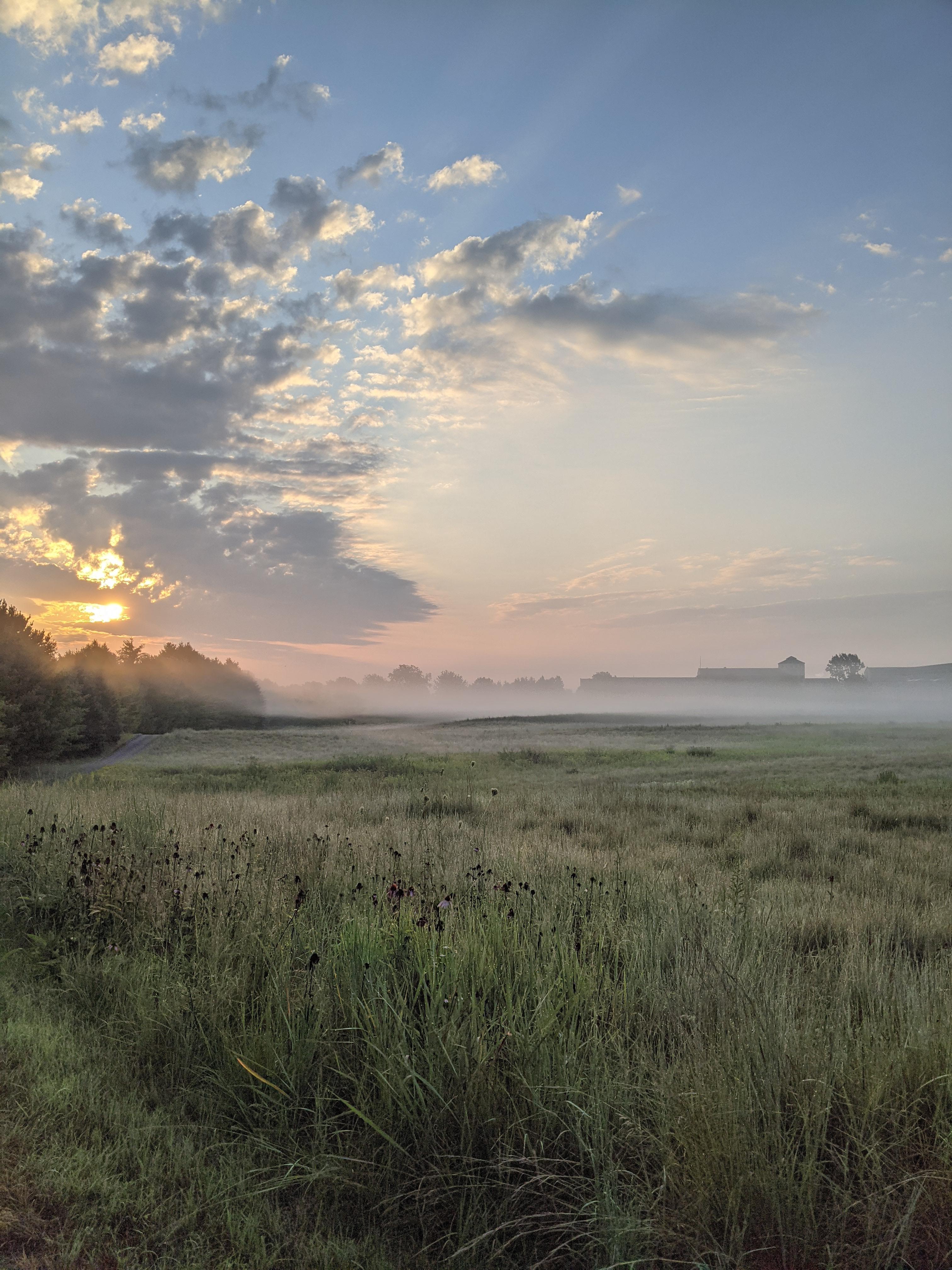 Can you imagine pulling into work and seeing this? One of our associates, Joyce, took this incredible photo over the summer.

With views like this, who wouldn't want to work here? 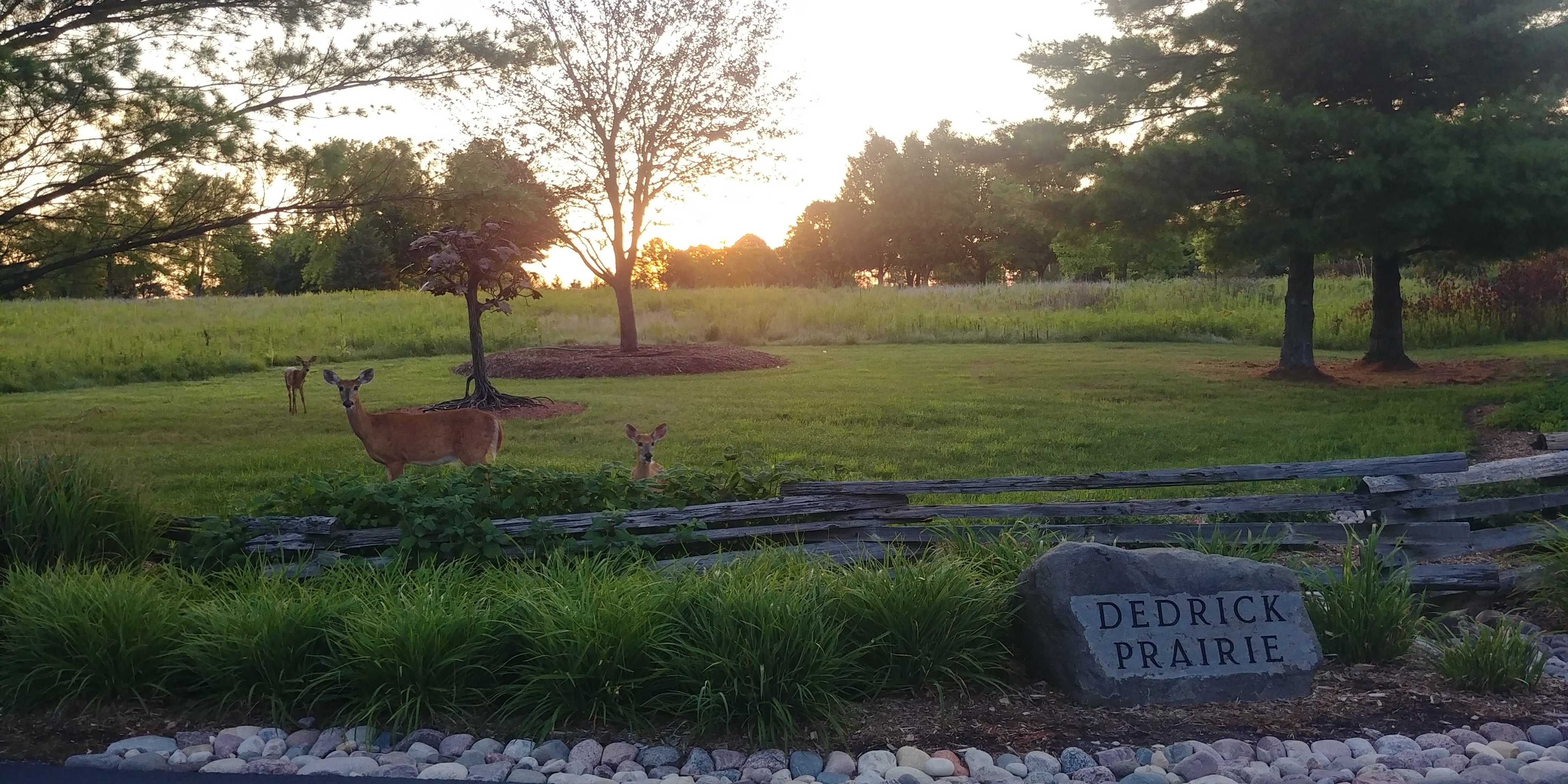 Over the summer, Linda, one of our associates, was able to grab some incredible photos. We love all of her pictures and are glad she shares them with us. Here's one of our favorites! 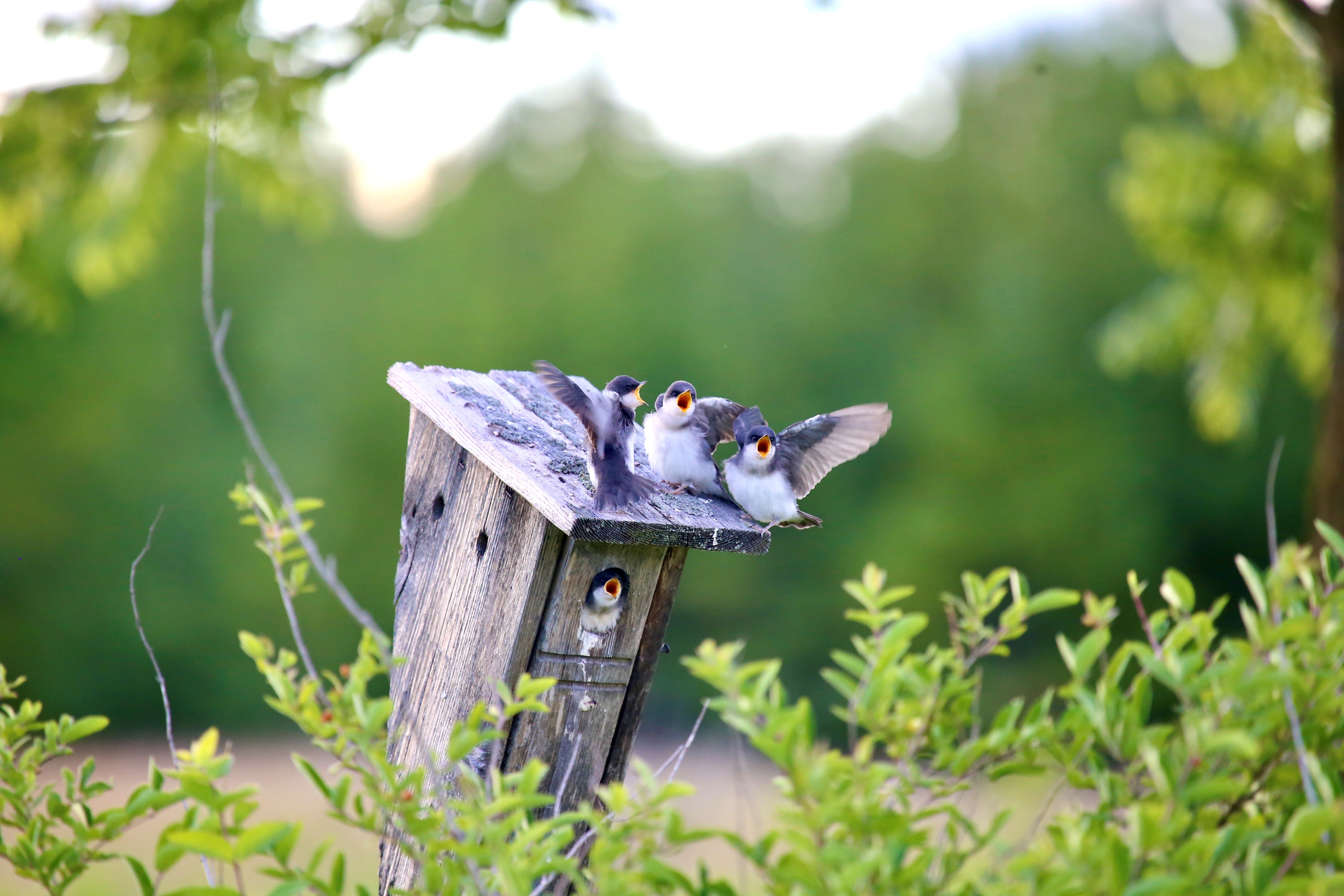 Last year we reintroduced beehives to the campus landscape. Four of the five bee colonies survived the winter and were in good shape this spring. The bees are very advantageous to have on campus. They are great pollinators for our fruit trees, our vegetables in the associate gardens, the shrubs and perennials in our campus beds, and for all of the wildflowers in our prairies. The hives are located in an area that is hidden and away from associate traffic. Undisturbed, the bees go about their business undetected. How cool?! 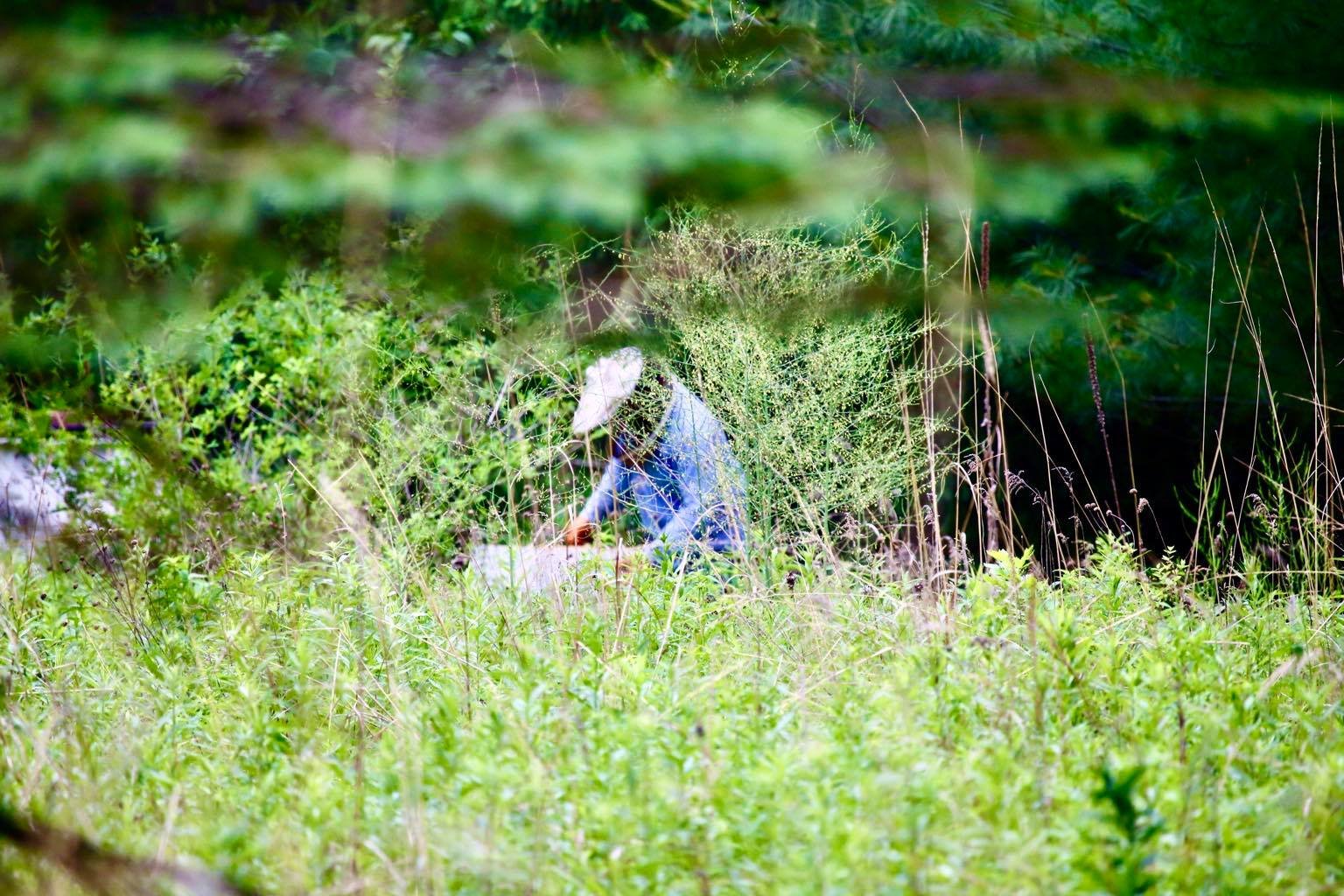 Another great perk of working at West Bend is the associate garden plots. For only $25 associates can plan, beautiful, organic gardens. The gardens are looking great this year! 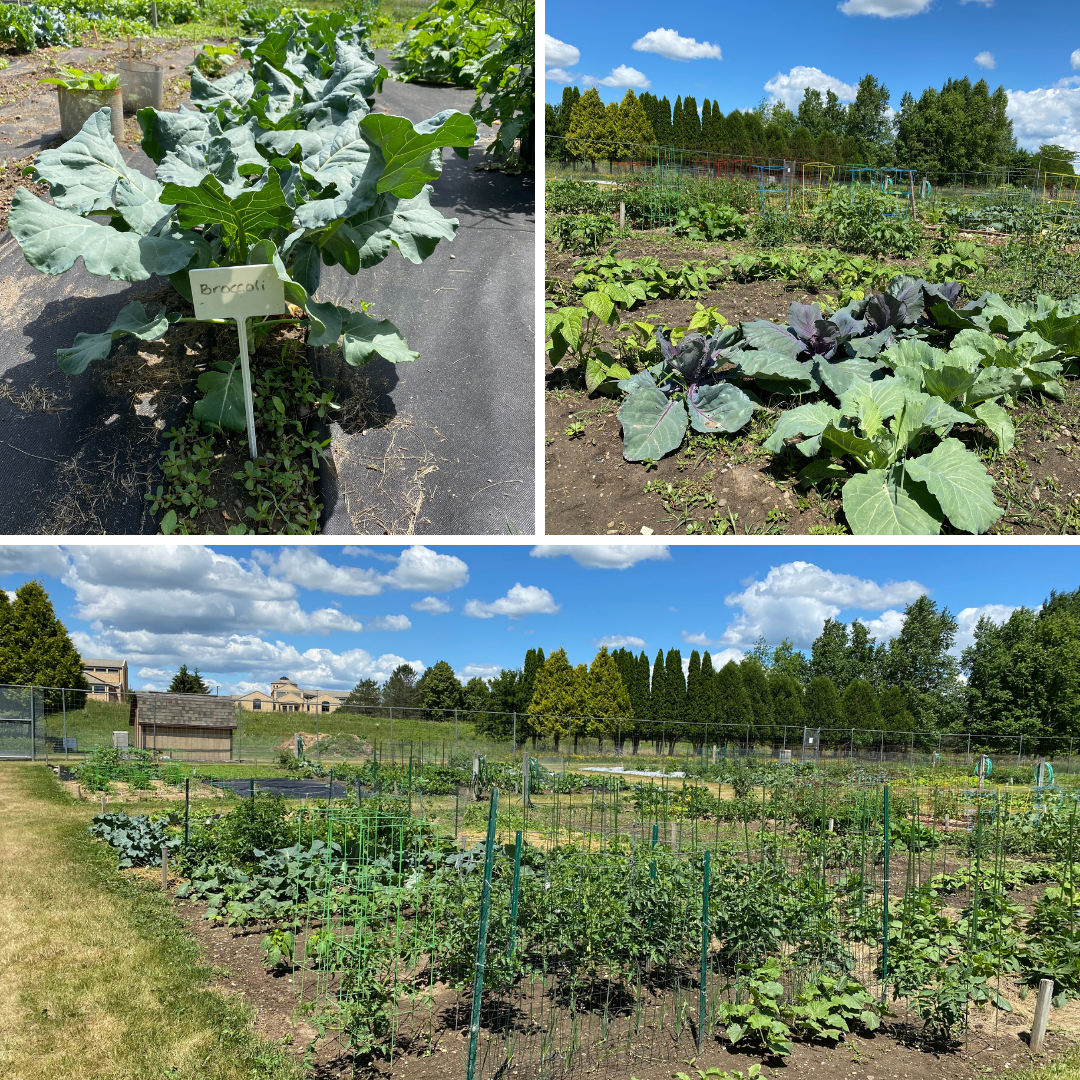 Our landscape renovation plan includes major changes inside the circle drive at the main front entrance. Specifically, the large copper beech tree and the metal burr oak tree have been relocated
and will be replaced with flower beds and lower vegetation.

Relocating a mature tree is a major undertaking. We contracted with a landscape firm that specializes in this activity. Late in the fall, the ground at the base of the tree was covered with straw to prevent it from freezing. As temperatures dropped, the root ball was excavated, wrapped, and allowed to freeze solid. A mammoth 66,000-pound front-end loader was then used to lift and move the 18,000-pound tree and root ball.

The copper beech tree was originally planted in honor of Rocky Dedrick. The metal oak tree is a sculpture commemorating West Bend’s reaching $1 billion in assets in 2003. The tree and the sculpture have been relocated as features of the newly established Dedrick Prairie. 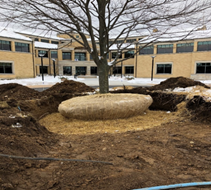 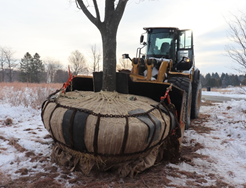 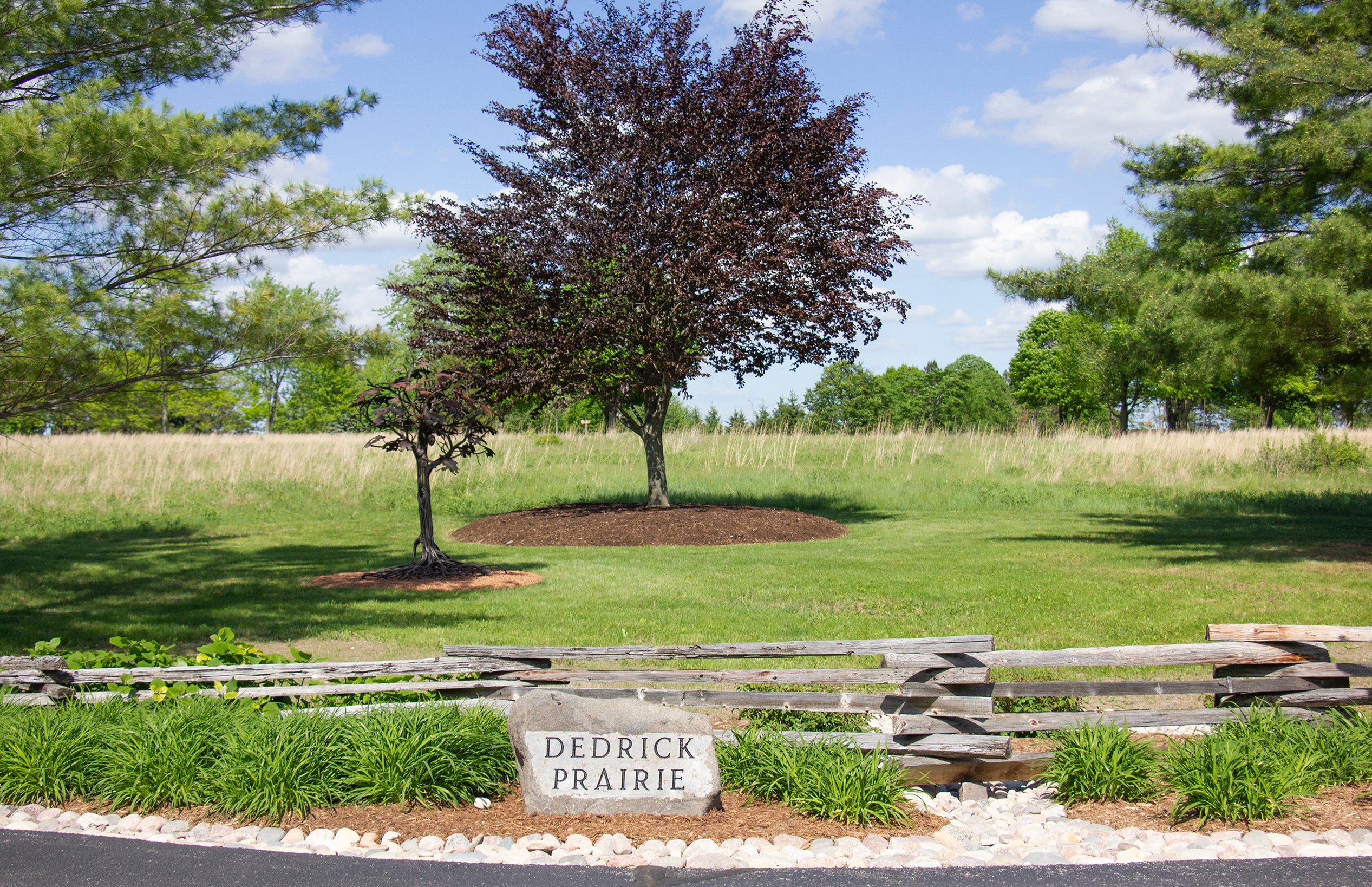 We've been working on some updates to the main entrance of our home office. The new West Bend sign looks amazing. The clouds always seem to be in the perfect place for a great photo too! 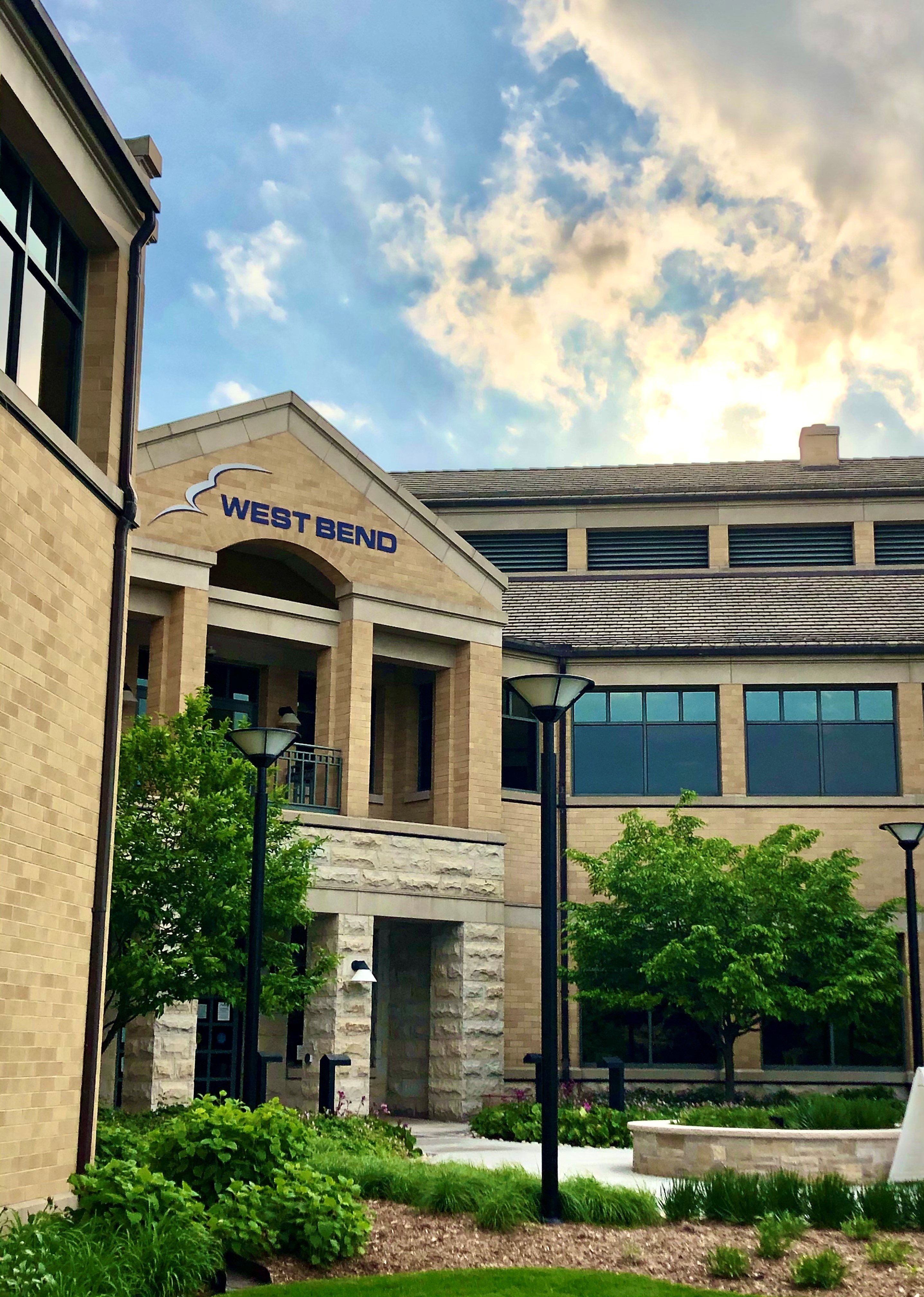 Last week, West Bend dedicated a portion of our prairie to John “Rocky” Dedrick, former president, CEO, and chairman of the board.

Rocky served as president of West Bend from 1982 to 2000 and was president when ground for the Woodland Building was broken in 1990. He was instrumental in restoring, what for many years, had been farmland to the natural prairie we enjoy today. Rocky got the idea to use natural landscaping from his brother Dan, a landscape architect while walking the property with him in about 1986. “We saw the land had been misused, that the only way they were ever able to grow corn was to pour chemicals and fertilizers into the soil. The topsoil was virtually gone. That’s when we decided to restore it.” He didn’t want West Bend to use a lot of water, herbicides, and fertilizers on the grounds because it was bad for the environment and expensive. In the 70s and 80s, manicured lawns at corporate buildings were “in” so his vision of restoring the land to its natural state was very forward-thinking.

He had a vision of what the property should/could look like and once the decision was made, Rocky made it his mission to learn more about restoring the land to its natural state. Rocky hired Marv, our former landscape supervisor, to execute his vision. The land was restored to its natural state by planting 60 acres with 25 varieties of native grasses, wildflowers, and trees. A pond was added, along with 8,000 trees and three miles of walking trails. It took five-seven years before the full results of all the plantings were evident. Today, our property is a haven for wildlife like deer, fox, pheasant, turkey, geese, and duck.

Two other portions of the prairie are dedicated to former presidents. The Barber Prairie commemorates Robert Barber who served as president from 1961 to 1976. The Fuchs Prairie honors Harold Fuchs, West Bend president from 1976 to 1982. Both are located on the west side of the building. 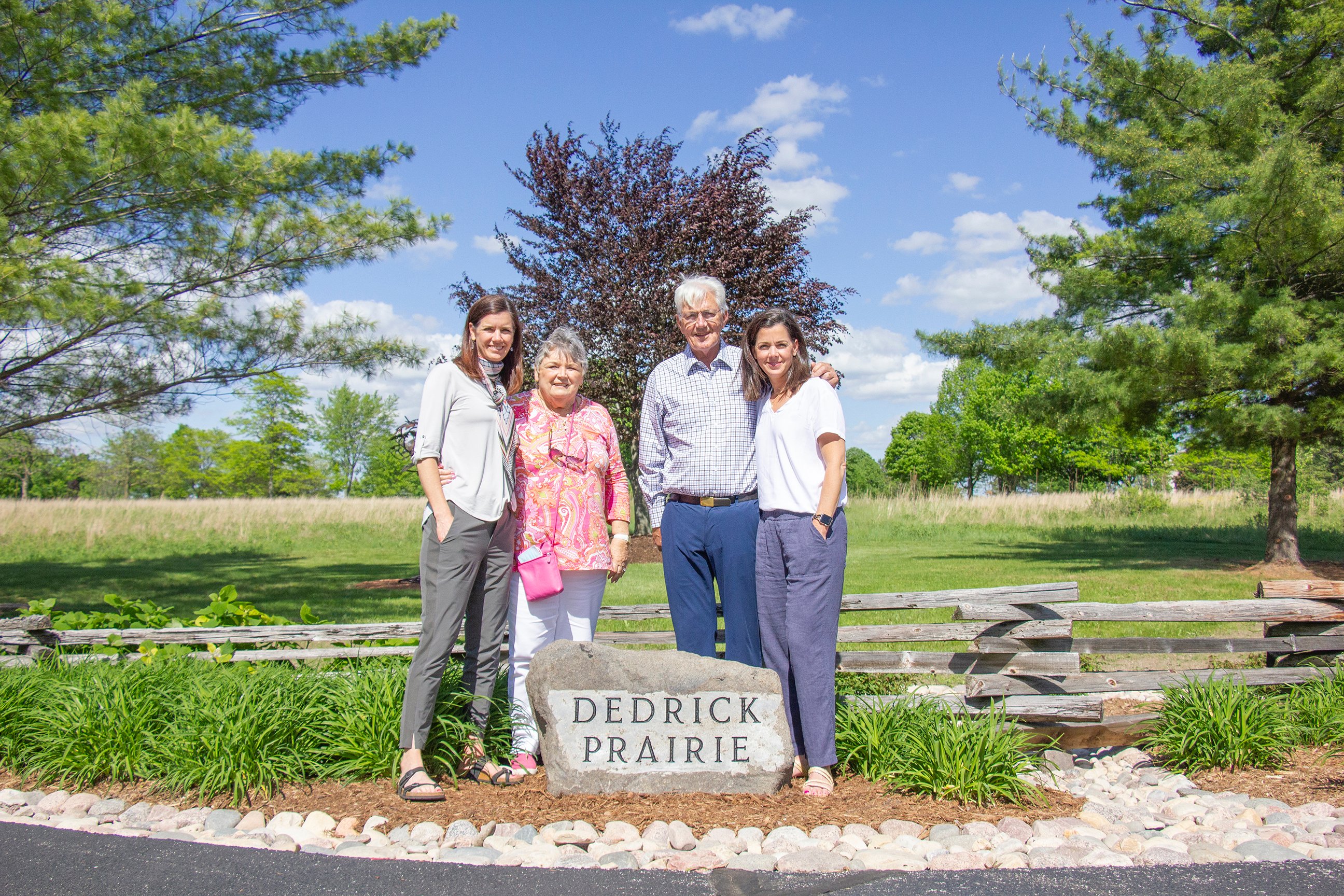 Linda, one of our associates, did it again with the incredible deer photos! She's always in the right place at the right time.

This time she was able to grab a few pictures of them bedding down for the night. They look so cozy underneath the shelter of the pine tree. This is not something you see often, how cool! 📸🦌 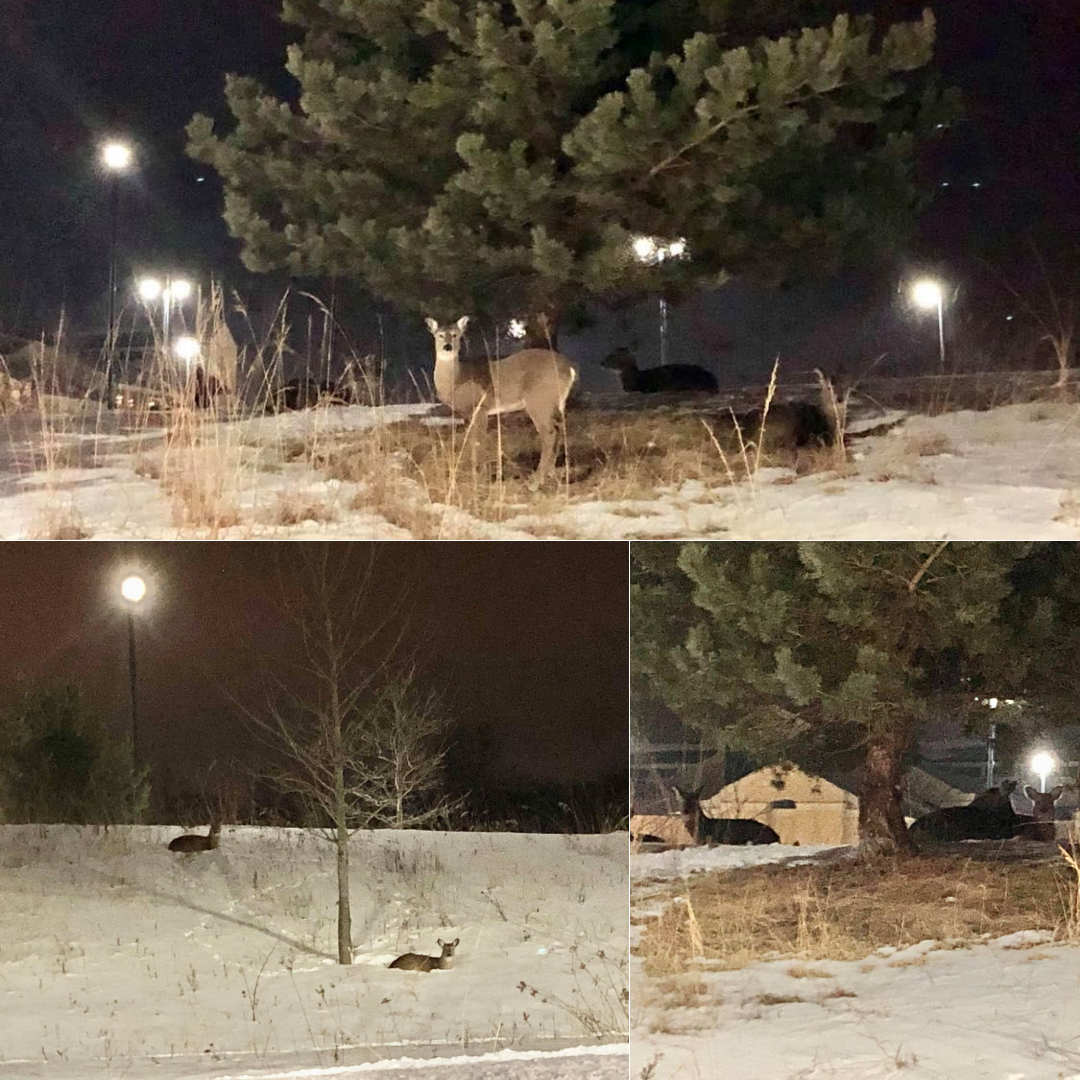 Jim starts every morning by heading out to the prairie for some exercise. He grabbed this photo today while snowshoeing! He said, “it's my time to think in a serene setting and prepare for the day.”
The prairie and walking trails are just two of the awesome perks of working at West Bend. Thanks for sharing this picture with us, Jim! It really does seem like the perfect way to start the day! ❄️ 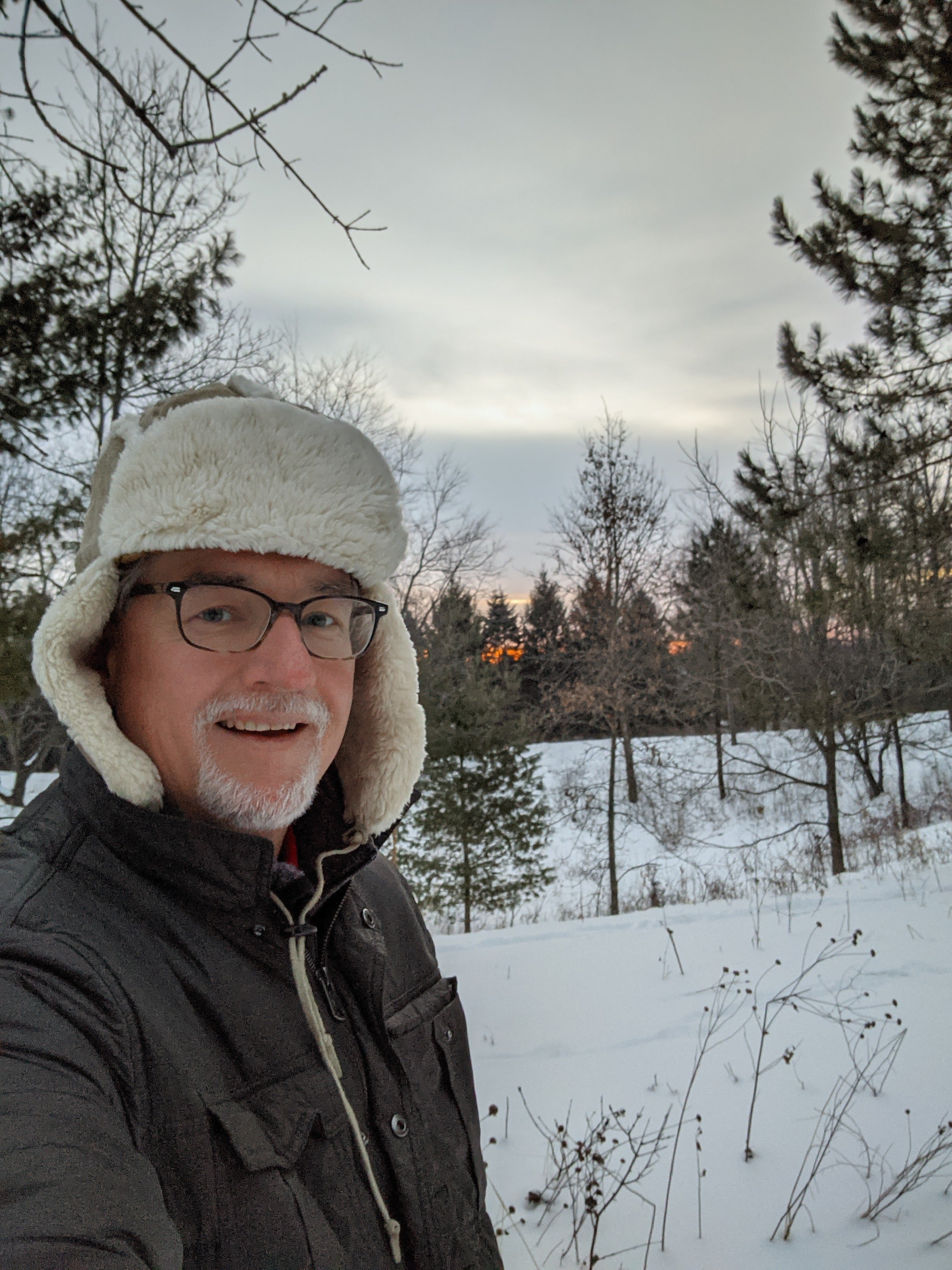