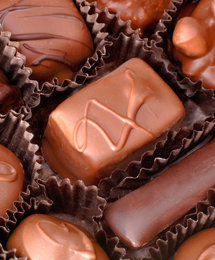 Valentine’s Day is a day away! I’m a chocolate lover so I think it’s only fitting that I dedicate this blog to chocolate!

When I was in grade school, I couldn’t wait for Valentine’s Day. While I enjoyed exchanging Valentine’s Day cards with my friends, what I loved the most was getting an Avon solid chocolate candy heart. Yes, my mom was an Avon lady.

So in honor of this holiday and my love for chocolate, I’d like to share these chocolate fun facts with you. Enjoy ... and Happy Valentine’s Day!

History of chocolate
• Historians believe chocolate has been around for at least 4,000 years.
• Cacao bean or cocoa bean is what chocolate is made from.
• Chocolate has been used for rituals, medicine, and pure enjoyment.
• Chocolate was first used as a sacred drink. As such, didn’t include sugar so it was very  bitter. Ancient cultures mixed ground cacao with other seasonings to make it spicy. This drink was served at weddings and when dignitaries from foreign countries visited.
• There are over 1,500 compounds in chocolate. Chocolate drinks were viewed as a possible cure for certain types of ailments.
• When the Spanish brought cacao seeds home to Spain, they began creating new recipes that changed the texture and taste of chocolate. They started making chocolate by adding sugar to the process which made it even tastier.
• In the 17th century, chocolate was a popular drink throughout Europe, mainly for the rich.
• The mass production of chocolate was made possible in the late 1700s with the invention of the steam engine.
• In 1828, a Dutch chemist discovered a way to make powdered chocolate.
• In 1847, Joseph Fry was credited with making the first modern chocolate bar.
• In 1868, Cadbury began marketing boxes of chocolate candies in England.
• Nestle brought milk chocolate to the market a few years later.
• 70% of today’s crop comes from West Africa.
• Today chocolate is a $4 billion dollar industry in the United States. Chocolate is heavily marketed at Valentine’s Day, Easter, Halloween, and Christmas.
• Chocolate has a connection with love, relationships, and joy.
• Hershey sells the World’s Largest Milk Chocolate Bar for $44.99.
• The biggest chocolate bar in the world was made by Thornton’s and weighs as much as five Ford Focuses.
• The average American consumes about 11.7 pounds of chocolate a year.
• The United States ranks eighth in the world for chocolate consumption; Switzerland is ranked number one.

To learn more about the story of chocolate, click here.

Benefits of chocolate milk after a workout

• According to William Lunn, Ph.D. and exercise scientist at the University of Connecticut, fat-free chocolate milk does a better job refueling and rebuilding muscles after exercise than the popular sports drinks.
• The explanation for this is that fat-free chocolate milk contains carbohydrates and protein, whereas the popular sport drinks only contain carbohydrates.
• Drinking chocolate milk leads to a higher concentration of glycogen which is also referred to as muscle fuel.
• Glycogen acts like an energy reserve that can be quickly used when the body has a sudden need for glucose. Replenishing glycogen will help improve your future workouts.
• Fat free chocolate milk is an inexpensive alternative to sports drinks which have become so popular with today’s athletes.

My daughter is a volleyball player so she’s very active and drinks a lot of sports drinks. I have a sweet tooth so I would much rather much drink chocolate milk, and now I have a good reason to. I guess that means I have to start working out!