Reality Alert: One day at work, my co-teacher and I noticed one of the parents we knew rushing in to get her child in the middle of the day. Apparently, this child had been acting strangely and complaining to his teachers that he didn’t feel well. His teachers noticed that he appeared to be having trouble breathing. By the time his mother arrived, he was in severe distress. At the hospital it was determined he had an allergic reaction to an almond he had earlier in the day. Luckily, his teachers recognized his reaction and he was ok. This was his first allergic reaction ever. -Story from a former childcare provider

Fifty five percent of the United States population tests positive to one or more allergens, according to The American Academy of Asthma, Allergy, and Immunology. Food allergies in particular are on the rise; in 2008, only 1 in 25 children had a food allergy, now it is 1 in 13. This means about two kids in every classroom has a food allergy. These allergies can be life threatening and require parents and teachers to work together to keep kids safe.

What is an Allergy? 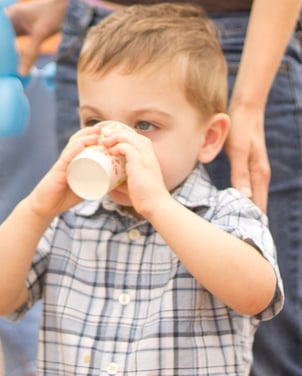 An allergy is an overreaction of the immune system to a normally harmless substance, like a food protein or pet dander. The immune system reacts as if the allergen is a harmful substance and attacks the body. Then, it kicks into high gear and tries to destroy the allergen, even though in reality it’s harmless.

An Allergy vs. An Intolerance

An allergy is not the same as an intolerance. An allergy involves the immune system and can be life threatening. An intolerance occurs when the body cannot digest certain foods. An intolerance can cause nausea, cramps, gas, bloating, and diarrhea and can be extremely painful. For example, many people are lactose intolerant, which means their bodies do not process the lactose that exists in dairy products. These people, however, are not allergic to dairy products.

Almost anything can cause an allergic reaction. There have been reported allergies to sweat, water, shoes, and the sun, for example. Below are some of the most common allergens in a childcare setting.

The Most Common Food Allergies

All of these foods are required by law to be included on the labels of packaged food products sold in the USA by the Food Allergen Labeling and Consumer Protection Act.

While most people develop redness, swelling, and itching after an insect sting, others have a serious allergic reaction. Yellow jackets, honeybees, paper wasps, hornets, and fire ants are some of the insects that can cause an allergic reaction.

Some people have allergic reactions to proteins found in animals’ skin cells, saliva, or urine. People are most likely to be allergic to cats, dogs, rodents, or horses.

Other common allergens include medications, latex, mold, and pollen.

Severe symptoms can be a sign of anaphylaxis, which is a life-threatening allergic reaction. Food allergies, especially peanuts, tree nuts, fish, and shellfish, are most likely to cause anaphylaxis; other common triggers are insect stings, medications, and latex. Symptoms usually occur within a few minutes (but can happen in seconds) after exposure to the allergen, but reactions can occur as much as 2-4 hours later.

The best way to treat allergies is to avoid exposure to the allergen all together. However, this is not always possible, especially when caring for small children. Mild reactions can be treated with antihistamines and oral or topical steroids. Severe reactions leading to anaphylaxis require the prescribed drug epinephrine.

Epinephrine is the drug form of the hormone adrenaline. It quickly improves breathing, increases heart rate, and reduces swelling of the face, lips, and throat. It is available in an auto-injector form; common brands include EpiPen, Adrenaclick, and Auvi-Q. In some states, epinephrine is allowed to be stored in public places, like a childcare center, without a prescription. It’s very important to be able to quickly administer epinephrine in the event of an emergency. Most brands will provide test units for practice.

Often, childcare providers worry they won’t be 100% sure that a child is having a reaction and won’t know when to use epinephrine. However, according to the CDC, “the risk of death from untreated anaphylaxis outweighs the risk of adverse side effects from using epinephrine.” If a child has a prescription for epinephrine, they’ve had a life-threatening allergic reaction in the past. Hesitation could put their life at risk.

Anytime epinephrine is used emergency services should be contacted immediately. The child will need further care and monitoring, even if they seem fine.

Anyone working with children should have some knowledge of allergic reactions. It’s crucial for providers to be able to recognize a reaction since children often won’t be able to describe what is happening to them and they could potentially be having their first reaction ever. FARE (Food Allergy Research and Education) lists some different ways children may describe a reaction, such as complaining about food being spicy or their tongue feeling hot.

Providers should also be aware that children with severe allergies could be targets for bullies. Thirty percent of children with food allergies reported being bullied due to their allergy. Educate the child’s peers about their allergies and be as inclusive as possible.