In the News: A 15-month-old boy began vomiting severely during dinner and his parents immediately rushed him to the emergency room. There it was revealed that the young boy had swallowed a nickel-sized button battery that had become lodged in his throat. He was immediately rushed to a specialized hospital where emergency surgery was performed to remove the battery before severe damage could be done. The doctors said that if they had not caught it so quickly the boy could have suffered severe and permanent damage to his esophagus.

What is a Button Battery? 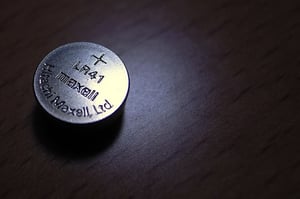 A button battery (pictured right) is a battery that is shaped like a round disc and is used to power a multitude of electronic devices including toys, games, hearing aids, remote controls, watches, singing greeting cards, and many more small electronic devices. Due to their small and shiny appearance, they are particularly attractive to small children.

There are two major hazards associated with the ingestion of a button battery, and both can be potentially life-threatening. The first hazard is from choking. Depending on the size of the battery, it can become lodged in a child’s throat. If this occurs the child will either begin coughing or will lose consciousness. Immediately call 911 if you suspect a child is choking. Someone trained in first-aid and CPR should treat the child if they are coughing and be prepared to perform CPR if necessary.

The second major hazard from the ingestion of button batteries happens when the battery is swallowed and gets caught somewhere in the body, mainly the esophagus. Once the battery becomes lodged it can generate a small electrical current that creates a chemical called hydroxide that causes tissue burn. These tissue burns can cause severe damage, which is why it is so important to seek treatment immediately, even if you only suspect a child has swallowed a button battery. Certain symptoms can signal the ingestion of a button battery and medical attention should be sought immediately. These symptoms include fever, vomiting, abdominal pain, and blood in stools.

What to do if a battery is swallowed?

The best way to prevent injuries from the ingestion of button batteries is to prevent them from ever being swallowed, but if it does occur it is important to act quickly to prevent serious injuries to the child. If the child is not choking, but still swallowed a battery the following steps should be taken to ensure no injuries occur.