Reality Alert: A childcare provider caring for an eleven-week-old baby swaddled him and placed him in a car seat for a nap. He was left in an empty room for two hours. When the provider finally returned, the infant was no longer breathing and later died. His childcare provider had recently been warned by her licensor about the dangers of using car seats as cribs but continued to use them anyway.

Often parents and childcare providers alike think that a car seat is one of the safest places for a baby. After all, a car seat is designed to keep them safe even in a serious car accident! What could be the harm in letting a baby nap in their car seat? Unfortunately, using a car seat as a substitute for a crib can have devastating consequences.

What Can Go Wrong?

When an infant is placed in a car seat in a vehicle, the seat is secured to a base at an angle that keeps the child’s airway open. However, when the seat is taken out of the vehicle, that angle is no longer safe. The baby is likely to slouch forward, which can be extremely dangerous when they are very young and have weak neck muscles. 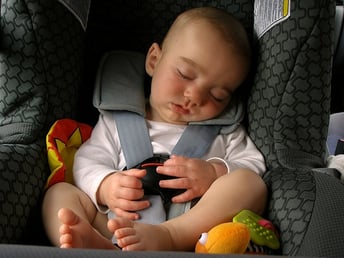 The Journal of Pediatrics studied a sample of infant deaths in sitting or carrying devices, like car seats and swings. They conclude, “Most, if not all, of these deaths might have been prevented had the device been used properly and/or had there been adequate supervision.” The authors of the study also offer some advice for parents and providers when using infant sitting or carrying devices:

These stories are a devastating reminder of just how important safe sleep environments are to reduce the chance of both positional asphyxiation and SIDS. Childcare providers and parents should know the ABCs of safe sleep: