In the News: Two young boys aged 12 and 13 drowned in a swimming pool at a youth camp due to extremely cloudy water. The boys went down a slide that dropped into the 13 feet deep end of the pool where they struggled and drowned. They were not reported missing until the children were loaded onto a bus and they didn’t show up. The lifeguards and counselors began searching the facility and the two were finally found by a lifeguard with goggles who felt one of them on the pool bottom. Over 30 people were interviewed during the investigation stated that the water visibility was poor and that they could not see past 3 feet under the water’s surface.

There are many factors that can contribute to making water excessively cloudy. Cloudy water will appear milky and white and have no colorations at all. If your pool’s water is colored red, green, blue, or black there are other problems with it and they need to be addressed differently. Cloudy water could be caused by improper filtration or a lack of necessary sanitizers. Another common cause is suspended particulate matter in the water. 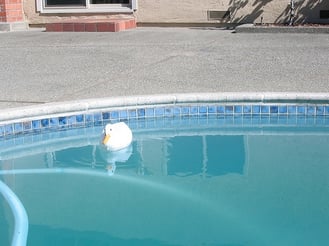 Cloudy water significantly contributes to the number of drowning deaths every year in the United States. Deaths from cloudy water typically come from pools with lifeguards, but the decreased visibility makes the lifeguard’s presence useless since they are unable to see the distressed swimmer. When a lifeguard can’t see clearly, it makes it impossible to scan the pool from bottom to top, which in turn makes it difficult to achieve the desired 20 second lifeguard rescue.

The best way to avoid the tragic story found above is to ensure the pool is properly maintained and routinely checked to make sure the water stays clean, clear, and visible. Proper pool chemistry needs to be maintained and measured constantly. Ensure pool chemicals are kept within ideal ranges and pool filters backwashed and cleaned regularly. When there are high swimmer loads, the pool should be checked more frequently and the water may need to be shocked. And finally, lifeguards should always enforce rules about swimmers showering before entering the pool, which decreases pool cloudiness and the likelihood of recreational water illnesses.

Monitoring the pool water clarity is an important aspect of aquatic safety. If the water becomes too cloudy it is impossible to see the bottom of the pool and any potential bathers that may have fallen below the surface. You know the pool water is too cloudy if you cannot easily see the bottom of the pool in all areas at all times. It is critical to swimmer safety to respond quickly if the water becomes too cloudy. Outdoor bodies of water,  typically dark and cloudy, require lifeguards to have additional certifications to ensure they know how to keep swimmers safe in that environment.

Responding to a Cloudy Pool

Evacuate all swimmers from the pool if you notice the pool water has become too cloudy to see the bottom clearly. Swimmers should not be allowed to return to the water until it has been treated properly and clarity has been restored. Do not hesitate and wait to determine if visibility is bad enough to evacuate; if you feel conditions are unsafe due to cloudy water, evacuate the pool immediately. Asking swimmers to leave a pool can be difficult, especially over the summer when the swimmer load is highest, but it is much easier to do than deal with a situation like the story at the beginning of this article.