Drowning at Summer Camp: A 4-year-old boy was found dead at the bottom of a swimming pool on his first day of camp. Despite barely passing his swim test, he was left unattended in a pool being watched by two lifeguards and three camp counselors. There were only eight other swimmers with him in the pool, but somehow the guards and counselors lost sight of him and his body was not found until it had been under the water for eight minutes. Attempts to resuscitate him were unsuccessful.

This story is just one of the thousands of drownings or near drownings that occur in the United States every year. 90% of all drowning deaths and injuries occur under some form of supervision, which means that, sometimes, even if procedures are in place to keep swimmers safe, drowning deaths still occur.

The best way to avoid having your pool become the epicenter of one of the thousands of tragedies that occur every year is to provide the best aquatic protection possible. 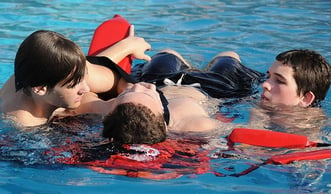 All pools should be protected by well-trained lifeguards and maintain safe lifeguard-to-swimmer rations. This, unfortunately, is not always enough as some drowning deaths are unavoidable. It is important for your staff and organization to know how to respond in the event of a drowning in order to protect your organization, investigate the incident, alert the victim’s family, and field questions from the media or other interested parties.

After a drowning or a near drowning, several pieces of information must be obtained in order to complete a thorough and productive investigation. The information needed for your investigation will include critical facts, interviews, physical evidence, and visual evidence.

Gathering reliable information after a drowning or near drowning is critical. The emotional impact of these events can quickly skew even the most basic details, so timing is everything. Gather contact information for all individuals involved, as they will be contacted numerous times throughout the investigation. Make sure to record full names, addresses, phone numbers, and any other relevant contact information for:

Even more details must be gathered after acquiring the contact information of everyone involved. Including:

Interviewing a witness is one of the most important aspects of a thorough investigation. The emotional toll a drowning or near drowning will have on people involved will make interviewing difficult, but it is crucial to get statements as soon as possible while details are still fresh. Witnesses should be encouraged to focus only on the facts and should not offer opinions or conjecture about what happened. It can be helpful in the future if the interviewer takes some brief notes about the witnesses, including if they seem believable, if they acted nervous, or any other relevant information.

Many pools are equipped by video surveillance equipment and this footage is often the best means of determining precisely what happened. If recording devices are installed, it is critical to preserve the footage immediately. Each surveillance system is different, but it is important to note that some are programmed to record over old footage after a certain period.

Consider taking photos of the pool area from a variety of angles. Photos can be used to capture where certain people were positioned at the time of the incident, show the layout of the pool, and identify any factors that may have contributed to the drowning or near drowning.

After a drowning or near drowning incident, the most difficult thing to do is alerting the victim’s next of kin. This communication must happen quickly as they may need to provide important medical information. The person designated as the family contact must remain composed and must not have been directly involved in the incident. Some other important considerations when alerting a victim’s next of kin include:

Dealing with the Media After a Drowning

There is a high probability someone from the media will inquire about the incident. Everyone within the organizations should know how to respond to these questions, so as to not incriminate the organization or inadvertently misrepresent facts. There are several key aspects in dealing with the media, including: