In the News: A nighttime fire at a day spa caused fire, smoke, and water damage forcing the facility’s closure. Thirty-six firefighters from three stations fought to contain the blaze for over two hours. Fire officials attributed this fire to a commercial dryer used to dry towels over night. The damage from the fire was primarily contained within the laundry room, but the smoke and water damage affected the entire facility.

Dryer fires are responsible for a significant number of damages, injuries, and deaths every year. There are approximately 15,600 structure fires, 400 injuries, and 15 deaths reported annually as a result of dryer fires. According to the United States Fire Administration, every year clothes dryer fires account for over $100 million in losses. Also, dryer fires involving commercial dryers have a 78% higher injury rate than residential dryer fires.

A majority of dryer fires occur as a result of highly flammable lint getting caught in the dryer’s vent and becoming heated to the point of ignition. Most dryers come with lint traps or filters designed to capture the lint. 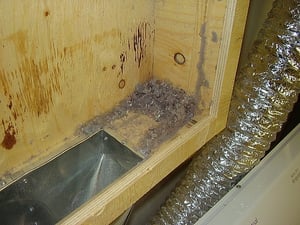 These filters, however, fail to capture all of the lint, yet the assumption remains that emptying the filter regularly is enough to protect a dryer. This assumption accounts for half of all dryer fires, since they typically start from within lint traps.

Warning Signs that a Dryer May be Damaged

If a dryer is displaying any of the following signs, it need to be serviced by a technician.

Typically a dryer vent needs cleaning every two to three years. It is recommended that the first vent cleaning for a dryer should be rechecked within a year to determine a reasonable frequency for follow-up cleaning. Several factors should be considered in determining the frequency of inspections.