Stories from the Road: A concerned West Bend customer contacted a loss control representative with questions regarding the current fire evacuation plan in place at their place of business. The management team and staff had routinely practiced a wide range of emergency drills and had a thorough written emergency action plan in place, but it was recently brought to their attention that many of the illuminated exit signs in the facility actually lead to dead ends. What were once viable exit routes were no longer accessible due to several additions to the facility. If a fire had occurred, the odds that patrons or employees would have safely reached an exit were slim. 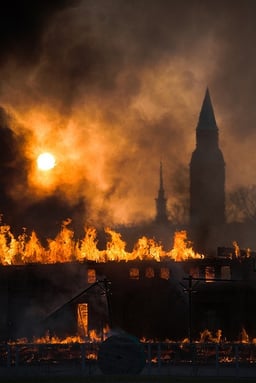 According to the United States Center for Disease Control (CDC), nearly ten people die in a fire every day. An additional 46 people are injured each day. The total cost of these injuries is believed to be an estimated $7.5 billion annually.  Designing, and regularly practicing, a fire-specific emergency action plan is one of the simplest ways to save lives if a fire breaks out in your facility.

The Occupational Safety and Health Administration (OSHA) states that a typical workplace must have a minimum of two exit routes for employees and patrons. They further state, however, “More than two exits are required if the number of employees, size of the building, or arrangement of the workplace will not allow employees to evacuate safely.” Every community-based organization is unique in size and design and will therefore have different needs, but most will likely require more than two viable exits.

An exit route must be a permanent part of the workplace and should never be used for programming purposes (i.e. stretching, signing in, etc.) or storage. Each exit must lead directly outside and be large enough to accommodate the building occupants likely to use the exit route. Therefore, areas with large concentrations of members – think pools during swim meets or gymnasiums during basketball games – should have ample room, and, ideally, an exit with double doors.

All exit route doors must be unlocked from the inside at all times, and “must be free of devices or alarms that could restrict use of the exit route if the device or alarm fails.” Additionally, any doors connecting rooms to exit routes must swing out in the direction of exit travel.

While some assistance from federal, state, and local government agencies is available, most businesses are required to develop their own evacuation routes and procedures. Consider the following points when reviewing your current escape routes:

How long ago was the current evacuation route planned?

Are the routes intuitive?

Stand in each part of the building and ask yourself the following questions:

Get your staff and members involved in this process!

Are all EXIT signs operating properly?

Do all exits lead to an area capable of providing safety for hundreds of members and staff?