In the News: A lightning strike in a Connecticut State Park has left one person dead and four injured. The victims were taken to Yale New Haven Hospital. The lightning strike occurred at Hamonasset Beach Park in Madison, CT. It is Connecticut’s largest shoreline park, with more than two miles of beach.

An average of 49 people are killed by lightning strikes annually in the United States and hundreds more are injured, according to the National Weather Service. While a majority of lightning strikes do not result in fatalities, 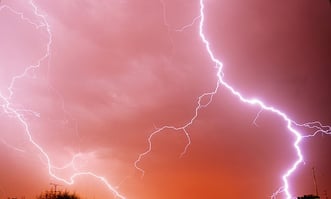 severe cardiac and neurological injuries such as memory loss, sleep disorders, and dizziness are rather frequent among victims.

The number of lightning-related fatalities has dropped sharply in recent years. This progress is attributable to improvements in both technology, such as weather apps that track lightning strikes, and education. While progress continues to be made, it is surprising how misunderstood lightning truly is.

A tree is never the safest place to be. Twenty-five percent of all lightning deaths in 2008 occurred when the victim was standing under a tree for cover.

Myth #3 – Only Worry When You Can Actually See Lightning

If you hear thunder, lightning is striking no more than twelve miles away. Lightning can, and does, strike many miles (up to 25 miles) away from a thunderstorm cloud. So if you hear thunder but don’t see any clouds, you still need to go indoors.

Indoors isn’t an Option. Now What?

The only safe place to be during a lightning storm is indoors. If you are unable to get to a fully-enclosed structure, a car is typically sufficient cover. The car must have a solid roof, the windows should be rolled up, and it should not be parked near tall standing trees.

If no vehicles or structures are in the immediate area:

While the odds of someone being struck by lightning are low, it is important to be prepared for any type of catastrophic event. Unlike other electrocution hazards, it is perfectly safe to touch and provide care to someone who has been struck by lightning. Immediately call local emergency services and begin administering CPR. If available, use an AED right away. While waiting for EMS to arrive, make sure other patrons quickly seek shelter since the storm will likely still be overhead.