Workplace Violence in the News: A workplace altercation over Christmas cards led to the hospitalization one employee and the incarceration of the other. The altercation occurred after an employee was asked by her manager to remove Christmas cards she had taped to the door of her office. When she refused to remove the cards, her manager punched her and knocked her to the ground. According to other employees in the office, the two had argued frequently in the past. The woman quickly recovered from her injuries but her manager is facing criminal charges for assault and battery.

Workplace violence is a very real problem in United States. 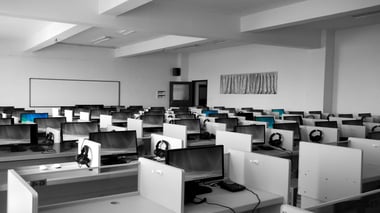 Every year, over one million people report instances of workplace violence, and it’s widely believed even more cases go unreported because victims afraid of further aggression. The Bureau of Justice (BJS) recently conducted a study on workplace violence over a ten-year period and made some startling conclusions:

While it is not easy to prevent unpredictable acts of violence, there are several initiatives that help protect an organization and its employees from occupational violence.

Performing pre-employment screening on all potential employees is the best way to reduce workplace violence. Individuals that have committed violence in the workplace in the past are over twice as likely to commit violence again. It is important to perform background checks and call references to determine if a candidate has ever displayed aggressive physical behavior. If an applicant has a history of violence in the workplace or a history of violent crimes this should be taken into consideration.

Ensuring a facility is secure can also help reduce the risk of occupational violence. Violence traditionally occurs one on one and in secluded areas of a facility. Reducing opportunities in which employees can become trapped or secluded can greatly decrease workplace violence.

Programs designed to help employees struggling emotionally or financially are a great way to increase overall morale and reduce instances of violence. Employee Assistance Programs can cover a wider variety of needs, but are all designed to reduce the stress of employees both at work and at home. These programs can include, but are not limited to, counseling, financial advising, substance abuse aid, health care concerns, and more.

Another great way to keep violence out of the workplace is to create a fun, enjoyable place for all employees to work. This can be as simple as Casual Fridays or Bring-Your-Child-to-Work Days. When people enjoy their work and the people they work with they are much less likely to engage in violent behavior.

Workplace violence can affect any person working in any profession, but there are a few situations that account for the majority of workplace violence incidents. Recognizing these hotspots in a workplace can help determining whether or not an organization should implement extra controls to prevent violence. Some of these situations include: