Man Drowns After Slipping out of Life Jacket: A man drowned after being thrown from an inner tube he was on with two other people. He was wearing a personal floatation device while on the tube, but after falling off he slipped out of his life jacket and drowned. His body was not immediately recovered, but his life jacket was. It is believed that his life jacket was not secured effectively or did not fit properly.

Thousands of people are injured and hundreds die in boating-related accidents each year. The following statistics are from the Center for Disease Control's boating safety website.

The United States Coast Guard (USCG) conducted a further study on boating fatalities and the effectiveness of wearing life preservers. Some of the most significant aspects of their study include: 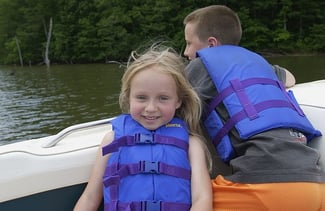 Personal floatation devices, also know as life jackets, life preservers, and PFDs, come in a variety of shapes and sizes – they even make life jackets for dogs! Different PFDs are available for different types of water-related activities, so understanding each design’s intended use is extremely important. The Coast Guard classifies PFDs into five main categories, each with unique properties and intended uses.

These are also known as offshore life jackets and are designed to keep an individual afloat and face up for extended periods. They provide 22 pounds of buoyancy, the most of any PFD, and are designed for use in deep, open waters where an individual may be in the water for a significant duration before help arrives. Class I lifejackets are more bulky than the other PFDs, but are the most likely to keep an unconscious person face up in the water for the longest period of time.

Class II PFDs, also known as near-shore buoyant vests, are the most common floatation devices. Also referred to as “classic” life jackets, these are the type most people are familiar with as they’re found on most recreational watercraft. They provide 15.5 pounds of buoyancy and may turn an unconscious person face up. Their use is suggested in calm inland water where any rescue would be relatively swift. Class II lifejackets come in a wide variety of shapes and sizes designed for both children and adults.

Also called floatation aids, these PFDs come in a variety of shapes and sizes and are designed for use in calm, inland waters where rescue will be swift. Class III PFDs will most likely not turn an unconscious person over. They come in many different varieties designed for various boating activities. They provide 15.5 pounds of buoyancy.

Various throwable flotation devices comprise the Class IV category. These PFDs do not replace wearable PFDs, but are designed to be used for extra support or aid someone who was not wearing their lifejacket. Common types of throwable PFDs include boat cushions, horseshoe buoys, ring buoys, and others. These devices are only useful if they are kept readily accessible to be thrown quickly in the event of an emergency. Class IV PFDs are not designed for children, non-swimmers, or anyone unconscious.

These PFDs are mostly used in occupational settings. These include deck suits, work vests, and other specially designed PFDs. Their use in any type of recreational setting would be highly unlikely.

Inflatable life jackets are designed to take up less space and be less bulky than traditional PFDs. These devices rely on internal chambers that, when inflated, provide buoyancy. There is a wide variety of Coast Guard-approved devices that meet the definition of an inflatable flotation device. Some of the defining characteristics of an inflatable floatation device include buoyancy levels, inflating mechanism, in-water characteristics, and more. When deciding to use an inflatable PFD make sure you are familiar with the manufacturer’s instructions and that the device is the appropriate size.

When Do I Have to Wear a PFD?

The United States Coast Guard requires approved life jackets on all recreational boats. The appropriate number of lifejackets on board a vessel depends on the number of passengers, the size of the boat, and what activities the boat is engaging in. Federal regulations require all children under the age of 13 to wear a life jacket at all times. Some states and municipalities have their own age requirements so always check local ordinances before launching. In general, it’s best for everyone on a recreational water vessel to wear a PFD at all times. More information on each state’s specific PFD requirements  is available from the U.S. Coast Guard. Please note that boats 16 feet or longer are required to have at least one throwable (i.e., Class IV) flotation device on the boat. This law excludes canoes and kayaks.

As seen in the story at the beginning of this article, wearing a PFD is not always enough to keep someone safe. PFDs should be fitted not only for size, but also for the activity the wearer is going to use it for. Another consideration to take into account when fitting someone with a PFD is to ensure it has the proper buoyancy for his or her weight. To make sure everyone has an appropriate PFD the following criteria should be met:

PFDs come in all shapes and sizes. There are life jackets for infants and for extremely large individuals – there are even PFDs for dogs – so there is no excuse for someone to be outfitted with a poorly sized personal floatation device. Always read the PFD manufacturer’s recommendations on sizing, which is usually based on a person’s weight, to determine if each individual’s PFD is appropriate.

PFDs are classified by adult and child varieties, with several different sizing options available. Never allow an adult to use a child-sized PFD and vice versa. Never assume that a specific life jacket will work, always make sure everyone actually tries it on to ensure a good fit. The PFD should be snug, but not overly tight, and all fasteners should close completely.

Whether using a PFD that fastens via zippers, snaps, or claps, it is important that it closes completely and stays closed while wearing it. To make sure a PFD fits and fastens properly, lift your arms above your head and have someone grab the top of the arm openings and lift upward, if the PFD stays in place it will most likely not come loose in the water. This YouTube video shows exactly how to test a proper PFD fit.

Test PFDs in the Water

In addition to the aforementioned test, a PFD should be tested by getting in shallow water to ensure it effectively keeps the wearer buoyant. The wearer should be able to float comfortably with their head well out of the water. Look to see if the PFD rides up on the individual as this could indicate that the PFD is too large.

Only personal floatation devices that are in good, working condition are safe to use. PFDs that are damaged in any way should be discarded immediately as even the slightest damage can greatly reduce their effectiveness. Other ways to help maintain your PFDs include:

Even a well-maintained PFD will break down over time. Routine inspection is essential for preventing the unsafe use of a PFD. Life jackets should be inspected before every use, but extremely thorough inspections at the start of every season should be standard practice. To conduct a thorough PFD inspection: