Responding to an Active Shooter

On June 12, 2016, forty-nine people were killed and an additional fifty-three were wounded in a nightclub in Orlando, Florida. Police shot and killed the gunman after a three hour standoff.

On the night of October 1, 2017, a gunman in Las Vegas opened fire on a crowd of concert attendees from his hotel room. Fifty-eight people were killed and 413 were wounded. The ensuing panic brought the total number of injured to 869. The shooter was found dead in his room and his motive was never able to be determined.

On December 14, 2012, twenty first graders and six adults were shot and killed during the Sandy Hook Elementary School shooting. A lone perpetrator forced his way into the school and began shooting at children and faculty before police arrived and he turned the gun on himself.

These are just a few of the numerous active shooter instances that occur every year in the United States. The places in the examples above are places most people typically feel safe and would never expect someone to suddenly start shooting people. 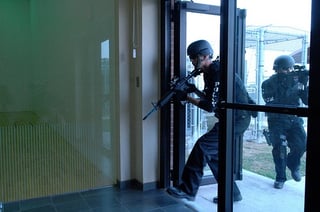 Active shooter incidents are difficult to predict since they often occur without warning and are typically over within minutes. There are, however, ways you can help prepare your organization for an event like this and potentially save lives.

What is an Active Shooter?

The term active shooter began to be used in the wake of the Columbine High School Massacre and has since been used to describe instances like those mentioned above. The United States Department of Homeland Security describes an active shooter as “an individual actively engaged in killing or attempting to kill people in a confined space or other populated area. In most cases, active shooters use firearms and there is no pattern or method to their selection of victims.”

Responding to an Active Shooter

Since active shooter situations develop so quickly and provide little or no warning, it is difficult to prepare for them, but developing a plan for your organization and practicing it can make a difference in saving lives until law enforcement arrives.

The best option in an active shooter scenario is to flee the premises and remove yourself from the shooter’s path. Unfortunately, this is not always a viable option as escaping could put you in greater danger if it brings you closer to the shooter. There are a few precautions you should take if, after assessing the situation, you determine you can safely evacuate. You should:

If you are unable to safely evacuate the path of an active shooter your next best option is to hide, avoid detection, and wait for law enforcement to arrive. While hiding is not as effective as evacuation, it can usually keep you safe long enough for law enforcement to arrive. Hiding can be dangerous though as it can leave you trapped if the shooter were to discover your location. To ensure your hiding spot is as safe as possible please consider the following recommendations:

Occasionally, in active shooter situations, evacuation and hiding are not available options and you may find yourself face-to-face with the shooter. If you find yourself in this situation, your only remaining option is to take physical action against the shooter in hopes of incapacitating them or disarming them. This should be considered an extreme last resort, but if you decide attacking the shooter is your only option consider the following strategies:

What to Report to 911 or First Responders

Active shooter situations are extremely frantic and are often over in a manner of minutes. Cooperating with law enforcement and emergency response personnel can prove critical in stopping the perpetrator and saving lives. If you are able to safely call 911, or if you safely evacuate and make contact with first responders, the information you provide is extremely important.

Do your best to provide the following information:

Law enforcement is trained to locate and stop the shooter above all else. This means they will not stop to treat or help evacuate any injured people. They will also not escort people out of the building until they have identified and stopped the shooter. This means if you are in a concealed area, remain there until law enforcement personnel indicate that the shooter is apprehended or killed.

Law enforcement will attempt to eliminate the threat quickly, so it is important to comply with all of their demands and do not attempt to interfere in any capacity even if you think you are being helpful. To best comply with law enforcement and enable them to do their job safely and effectively do the following:

Another key issue to consider when reacting to first responders is that an incident like an active shooter may involve more than uniformed police officers you are accustomed to seeing. Some may be in SWAT gear and others may be in plain clothes so it is important to respond cautiously to anyone claiming to be law enforcement until you are sure they are in fact law enforcement personnel.

Developing an Emergency Active Plan is essential in protecting staff and guests in the event an active shooter enters your facility. Every organization’s Emergency Action Plan will be different based on the nature of the organization as well as the design of the building, but certain components will be the same for everyone.

Your plan should detail each individual’s responsibilities in the event of an emergency and should be updated regularly to ensure all staff is up to speed. In addition, all evacuation routes detailed in the plan should be checked regularly to ensure they are still viable and nothing is obstructing them. Some key components to consider in your organization’s Emergency Action Plan include:

Another key consideration when developing your Emergency Action Plan is to accommodate for any employees or guests that may have disabilities or limitations. It is important to place people with restrictions in areas where they would be able to evacuate in the event an active shooter enters your organization.

Preparing for an Active Shooter

Another great way to ensure your employees are well trained and that your Emergency Action Plan is as effective as possible is to contact local authorities. Law enforcement personnel will be able to help develop a plan and may be available to help conduct drills. It is recommended that before conducting any active shooter drill that all employees, guests, local law enforcement and anyone else who may be in or near your facility are made aware of the drill as to avoid any potential panic or miscommunication.

Interested in more information and tools to help prepare for an active shooter situation? Here are some tools from other organizations that we found helpful: