Responding to an Asthma Attack

Real Life Asthma Attacks: A teacher had to rush to the aid of a child after noticing he was lying down on the playground. After attending to the child she noticed he was breathing very heavily and was unable to speak. The teachers did not know the child was asthmatic and had not been given his inhaler. Without access to an inhaler his symptoms quickly worsened and he lost consciousness as his breathing shut down. Eventually 911 was called and by the time the paramedics arrived he was suffering cardiac arrest. Luckily, the boy arrived at the hospital in time to stabilize and he was able to make a full recovery. 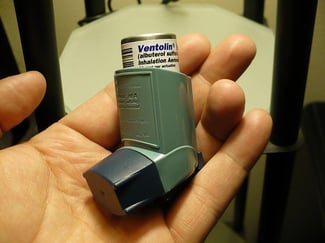 Asthma is a disease affecting the lungs and is the most common long-term disease in children. The causes of asthma are difficult to determine and there is no cure for it. If someone is diagnosed with asthma the only medical option is to respond to attacks and avoid activities that trigger attacks. Symptoms of asthma and asthma attacks include wheezing, shortness of breath, chest tightness, and coughing.

Asthma attacks can be triggered by a number of environmental factors and one of the best ways to decrease the likelihood of an attack occurring is to remove these factors. Some of the most common and easily identifiable asthma triggers include:

Another major trigger for asthma attacks is strenuous activity. People who suffer from asthma are well aware that participating in athletic activity greatly increases the possibility of experiencing an attack. Due to increased lung use during these activities, the lungs become more strained which leads to asthma attacks. It is important that all participants in athletic activity that suffer from asthma let activity organizers know so they are prepared to respond if the individual suffers an attack.

Identifying and Responding to an Asthma Attack

The only way to effectively respond to an asthma attack is to be able to quickly spot the most common asthma symptoms. These symptoms will include:

If someone is suspected of experiencing an asthma attack it is important to act quickly. People suffering asthma attacks can lose consciousness quickly making it more difficult to administer their medication. Follow these important key steps:

Difficulty breathing can be extremely frightening and can cause the sufferer to go into shock, which is why acting quickly and offering reassurance is vital. Help the person get into a comfortable position for breathing and monitor their temperature to make sure they are not becoming too hot or too cold, which are both indicators of shock.

The majority of the time people suffering an asthma attack have had one before so they know what needs to happen. For young children, make sure parents provide directions on how to respond to their child’s asthma attacks. If no instructions are given make sure to thoroughly read the directions on their medication, as some asthma medications are prescribed to be used once daily (long-acting) and are not meant to be used to counteract an attack.

3. Asthma Attacks with No Medication

In some rare cases a person may suffer an asthma attack and may not have been previously diagnosed with asthma. If this is the case it is usually a sign of a milder form of asthma since it has never previously manifested. Follow the same procedures in step one and help position them for comfortable breathing and monitor for shock.

If, after the administration of proper medication, the individual’s symptoms do not improve call 911.