In the News: A 25-year-old woman in Ohio was sentenced to six years in prison after she was involved in a car accident that claimed the lives of two teenage girls. Natasha Boggs was texting on her phone when she drifted off the road and struck the two girls who were walking to school. A 15-year-old boy was also seriously injured in the crash. Boggs was also convicted of tampering with evidence as immediately following the accident she quickly deleted the text messages from her phone.

Americans sent 781 billion text messages every month in 2017. According to the National Safety Council, cell phone use while driving leads to 1.6 million crashes and about 390,000 injuries every year. More than 4,000 people were killed in 2018 due to cell phone and electronic device usage. This is a serious problem that seems to get worse every year.

Researchers at Virginia Tech Transportation Institute determined 80% of all crashes, and 65% of near crashes, were caused because drivers were looking somewhere other than the road in front of them. This study validates the importance of minimizing distractions while behind the wheel.

After all, avoiding a crash is difficult enough even when a driver is alert. In fact, according to CNBC, a 2009 experiment with Car and Driver magazine showed texting while driving had a greater impact on safety than driving drunk. While driving drunk on a controlled road course, the stopping distance while driving 70 mph increased by 4 feet; by contrast, reading an e-mail added 36 feet, and sending a text added 70 feet. For these reasons, company policies and procedures should expressly prohibit text messaging.

As vehicles and technology become more advanced, the potential for distraction will become nearly unavoidable. Even technology meant to minimize distractions, like Siri on the iPhone, can be dangerous. Employees need to be constantly reminded to postpone cell phone calls and GPS use until they have either reached their destinations or pulled off of the road. Successfully enforcing these policies can be difficult. Many employers find value in shock-and-awe strategies; an abundance of horrifying auto wreck stories, photos and videos online, make this tactic inexpensive and effective.

As if the threat of serious injury or death isn’t enough, employees may be interested to find most states across the country have outlawed texting while driving. Only Missouri has a partial ban and Montana is the only state with no ban. 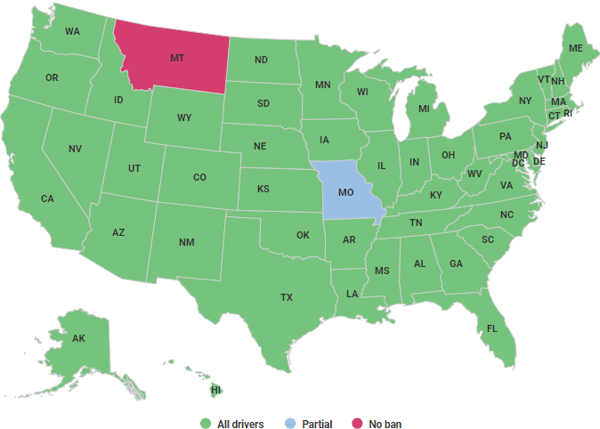