Tornadoes in the News: On May 22, 2011, one of the deadliest tornadoes in U.S. history ripped through downtown Joplin, MO causing an estimated $3 billion in damage and claiming at least 151 lives. The damage was devastating; schools, hospitals, nursing homes, and other large buildings were completely leveled. Entire neighborhoods disappeared and steel and concrete warehouses were flattened. The American Red Cross estimated that around 25% of Joplin was destroyed. The loss of life was even more shocking. The Joplin tornado was the first time since 1953 that more than 100 people were killed in a single tornado.

Tornadoes are one of the most destructive forces in nature. A tornado’s whirling winds can reach 300 miles per hour. Damage paths can be in excess of one mile wide and 50 miles long. 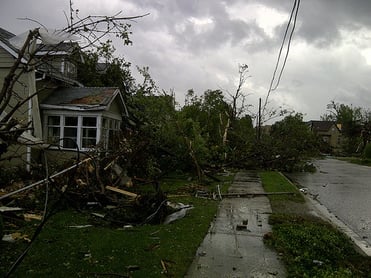 Every state is at some risk from this hazard. Occasionally, tornadoes develop so rapidly that little, if any, advance warning is possible before a tornado hits.

Tornadoes can strike quickly so it is important to monitor the weather closely during any type of storm activity. The United States National Weather Survey will issue alerts during storms to inform people of the likelihood of a tornado forming. Monitoring these broadcasts and understanding what the different alerts mean can help you respond quickly and appropriately.

Tornado Watch: Current weather conditions are ideal for the formation and development of a tornado. Increase weather monitoring and prepare to seek shelter immediately.

Tornado Warning: A tornado is occurring somewhere in the area or a tornado touchdown is imminent. This is typically when a tornado siren will sound. Seek shelter immediately and wait until weather stations announce it is safe to exit.

Be prepared! Too often the biggest contributor to tornado injuries and deaths is failure to respond to warnings. People who are not prepared are often caught off guard by tornadoes and don’t have enough time to seek proper shelter or warn others about approaching tornadoes. The following tips, if implemented before storms, can be the greatest method of preventing tornado deaths.

Once a warning is issued it is important to act quickly and make sure everyone is accounted for and safely located in the designated tornado shelter area. Depending on where you are when the warning is issued there are varying degrees of safe locations to be in during a tornado. The following instructions, based off recommendations by the Federal Emergency Management Agency or FEMA, are designed to help individuals determine the safest place to protect themselves.