Take a kid to a party with a bounce house and chances are you won’t see them for long. Most kids are thrilled to jump and flip in these inflatables for hours. Bounce houses and other inflatables seem to be at every church picnic and child birthday party, providing endless entertainment for kids and even adults. However, injuries are on the rise and some of these injuries can be life threatening. 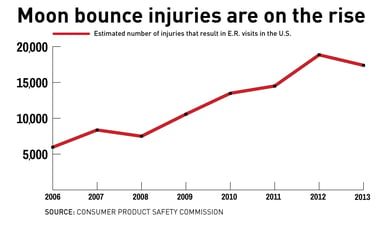 According to the Consumer Product Safety Commission, between 2003 and 2013, 113,272 emergency department-treated injuries occurred due to inflatables. There were also 12 deaths reported in that period. That means on average 31 people per day were seen in emergency rooms with injuries from inflatables.

Everyone has seen the videos of bounce houses flying away due to high winds, but in reality, most injuries occur inside the bounce houses. Broken bones and head injuries are the most common. While most broken bones will eventually heal, a neck or spine fracture can be fatal or have life-long consequences.

These inflatables aren’t going anywhere. However, a few things can make them safer: 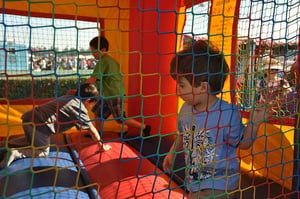 Only use outdoor inflatables in good weather

Closely supervise children playing in inflatables, no matter how old they are