Lifeguarding: How Old is Too Old?

A West Bend loss control representative was asked by the aquatics director for one of our customers if we had a policy on the maximum age of a lifeguard. This is an excellent question. In short, virtually no organization should have a policy indicating a maximum age limit for any employees. For an in-depth legal analysis we turned to our very own Jenn Seidler.

Some states have enacted their own versions of the ADEA which may apply to people both over and under age 40 who are victims of age discrimination in the workplace. 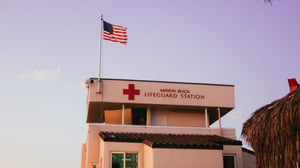 The ADEA’s protections apply to employees and job applicants who have been discriminated against based on age in any term, condition, or privilege of employment -- such as hiring, firing, promotion, layoff, compensation, benefits, job assignments, and training.

An employment policy or practice that applies to everyone, regardless of age, may potentially violate the ADEA if it has a negative impact on older employees or applicants, and is not based on a reasonable non-age factor. Employers are, however, allowed to set age requirements for employment only if they can establish that age is a "bona fide occupational requirement."

Bona fide occupational requirements arise in situations where the employee’s age in itself is a vital requirement of a job. This may manifest in forced retirement ages for persons in high-risk safety positions such as commercial jet airline pilots; or in situations where the age of the person is required for truthful artistic representation of a certain age – such as in the careers of models, actors, dancers, or voice-over performers. While thirty-something actress Jennifer Love-Hewitt recently played a high-school girl on television, if the producers of Law and Order SVU had decided not to hire her because of her age, they would have been well within their right to do so under the ADEA as a bona fide occupational requirement.

Now, about lifeguards – there does not seem to be any bona fide occupational requirement for lifeguards to be under a certain age. Lifeguards must pass rigorous physical and skills tests in order to keep their jobs. No matter a person’s age over 40, as long as that lifeguard can pass the tests, keep physically fit, and do his or her job, they should be allowed to do so. About 20 years ago, there was a news story about a lifeguard in California who retired from the active lifeguarding service at age 64 – this after fighting and winning an age discrimination battle when he was even younger than that.

The ADEA also protects against age-based harassment, or seriously offensive remarks. The ADEA does not prohibit simple teasing, offhand comments, or isolated, minor incidents. Age-based comments may become an ADEA issue when they are so frequent, blatant, or severe that they create a hostile environment for the employee, or when the teasing itself results in the employee being fired or demoted. Along those lines, an employer may not threaten, harass, or retaliate against a person for opposing harassment or discriminatory employment practices, or for filing an age discrimination charge, testifying, or participating in any way in an ADEA proceeding.