Many people in the Midwest remember when the roof of the Metrodome, football stadium for the Minnesota Vikings, collapsed in 2016. The video from the collapse made national news and the Vikings were forced to play in a college stadium while a new facility was built. The Metrodome had a very unique roof structure, but even conventional roofs on commercial buildings can, and do, collapse. An example from one of our claims involves a strip mall. The gutters became clogged with leaves and debris. During a heavy rainstorm, water ponded on the roof and eventually caused the roof to cave in, resulting in serious damage to the stores below. 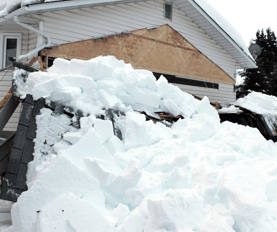 A roof collapse may seem like a very unlikely event, but it happens more often than one would think. We get a handful of roof collapse claims every year, and they always cause a devastating amount of damage. However, with a consistent roof maintenance plan, businesses can avoid the destruction from a roof collapse and extend the life of their roofs.