What you need to know about vacant building insurance coverage 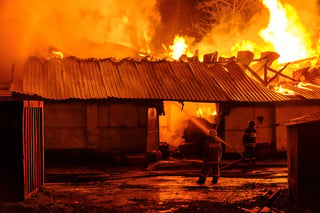 Buildings that are vacant for extended periods are vulnerable to vandalism and fire, partly as the result of only occasional maintenance and security oversight.  The most recent data from the National Fire Protection Association cites  there are an estimated average of 31,000 structure fires in vacant buildings per year, resulting in an average of 50 civilian deaths, 141 civilian injuries, and $642 million in direct property damage per year.

Most insureds are not aware of the restrictions in their commercial property insurance when a building is unoccupied or vacant.  One of the more common coverage forms includes this provision:

When this policy is issued to the owner or general lessee of a building, building means the entire building.  Such building is vacant until at least 31% of its total square footage is:

When a building has been vacant for more than 60 consecutive days before a loss or damage occurs, there is NO COVERAGE for vandalism, sprinkler leakage (unless you've protected the system against freezing), building glass breakage, water damage, theft, or attempted theft. For other types of covered claims, such as fire or wind, the amount payable would be reduced by 15%.

The Solution to waive these restrictions:

Tell your insurance agent if 70% of your building is vacant or unoccupied, defined as not being used by the owner, lessee, or sub-lessee to conduct their customary operations. Your agent will work with the insurance company to provide the proper vacant building insurance coverage.

You can add a Vacancy Permit endorsement, which reinstates coverage for the types of losses mentioned above. This endorsement is designed for  when the hazards that are normally associated with vacancy exist, but the insurer has elected to underwrite the exposure. A premium is charged for this endorsement.

Premium or coverage considerations (by the policyholder or the insurance company) may affect whether vandalism or sprinkler leakage claims would continue to be covered.

Again, we stress that building owners should keep their insurance agents informed of the occupancy conditions in their property so proper vacant building insurance coverage can be continued under the policy.