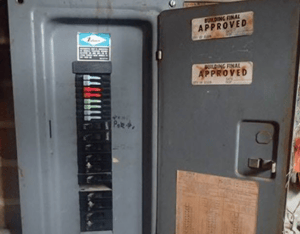 Zinsco electric panels could leave property owners at risk for both fire and electric shock as a result of failing to operate properly as much as 25% of the time.

In the 1970's, the manufacturing of Zinsco panels came to a stop.  Sylvania then bought the company, which is why Zinsco equipment is occasionally identified as Zinsco-Sylvania or GTE-Sylvania-Zinsco. Experts say that Zinsco panels that were produced more than 30 years ago do not meet current safety regulations. Furthermore, these panels would not receive today’s UL listing.

To identify a Zinsco panel, look for a vertical line of color-coded circuit breaker handles down the middle of the electrical box. In addition, Zinsco panels typically have the logo at the top of the panel. Due to the deficiencies found in these panels and the adverse effects the panels can cause, Zinsco electrical panels should be replaced.

How is an electrical panel supposed to work?

The design flaws identified in Zinsco panels include:

Even after the cover of a Zinsco panel is removed, everything can appear fine and seem to be operating, but what isn’t visible from the front can cause serious issues. Upon exploring the components within a Zinsco electrical box, electricians sometimes find that breakers have melted to the bus bars and, therefore, cannot be removed. This is because an overload of current is being drawn due to the increase in today’s electrical demands. In that condition, a breaker would not be able to trip and possibly allow an unsafe amount of electricity into the home. This could lead to a potential fire or increase the risk of an electrical shock.

Most Zinsco panels that are still in use are more than 40 years old. As time has passed, electricians and home inspectors have found that Zinsco panels can work fine for many years, but as electrical demands have increased, these panels can overheat, melt, and arc. When this occurs, it causes the components inside of breakers to burn out, preventing the breaker from tripping and leading to a significant fire hazard.

A licensed electrician should be the only person removing breakers from a Zinsco Panel. Due to their qualifications, they’ll be able to determine if the breakers have melted to the bus bars. Because breakers can appear to be off when they’re actually still conducting electricity, serious electrical shock risks are present.