Children Filmed by Pinhole Camera in a Locker Room: While inspecting a high school locker room an employee made a startling discovery, a pinhole camera was stationed in one of the lockers and was positioned to catch students undressing and showering. An investigation determined a 17-year-old student placed the camera there and at least one student under the age of 18 was recorded.

While technology has made our lives easier in many ways, it’s also created new problems. The ability to record people without their knowledge might be one of the biggest safety hazards created by new technology. Virtually every cell phone on the market has a camera capable of taking discrete photos, and the large majority can record video as well. 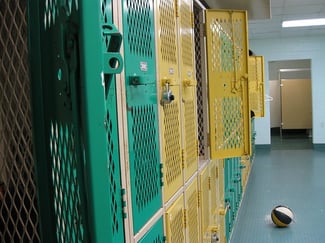 In fact, many phones are now capable of streaming live video footage.

At West Bend, this issue has been on our radar for years, so we published an article several years ago recommending that all electronics be banned from locker rooms. While we continue to stand behind this recommendation, it’s clear that this policy only addresses recording devices that can be observed. What about concealed recording devices?

A quick search on Amazon shows hundreds of relatively inexpensive and easily concealable recording devices. There are recording devices that can be hidden in buttons, watches, glasses, necklaces, and almost anywhere else you can think of. Devices like these make it difficult to protect people from being recorded without their consent, especially in locker rooms.

Detecting secret recording devices is extremely difficult. The best way to protect people in locker rooms is to provide regular supervision. Individuals who loiter in locker rooms should be closely observed as well as individuals who frequently enter and exit the locker room. Additionally, anyone that appears to be fidgeting for long periods of time in shower and bathroom stalls or near lockers should be questioned. Making staff aware of the dangers posed by hidden recording equipment in locker rooms can make the difference in catching people in the act.

Another way to help keep lock rooms safe is to make members aware of the danger and encourage them to report any suspicious behavior. Since the people using the locker room, bathroom or changing area are the ones most likely to be recorded, they have the best opportunity to catch a perpetrator in the act. Talking to members about the danger and what to look for can stop people from recording people in locker rooms without their permission.

Shielding people from being recorded in a locker room is an inexact science. The best way to prevent people from secretly recording someone is to routinely inspect locker rooms. These regular inspections can deter potential voyeurs and can lead to catching someone in the act of filming or installing a hidden camera.

But what should you be looking for during a locker room inspection? We’ve created a thorough Locker Room Inspection Checklist designed to deter voyeurs from exploiting the people that use you facility’s locker room, changing room or bathroom. The checklist outlines all of the things a staff member should be looking for during an inspection. By posting this inspection sheet on a clipboard in the locker room, it will be clear to predators that the locker room is regularly patrolled, and may deter them from even attempting to record anyone.