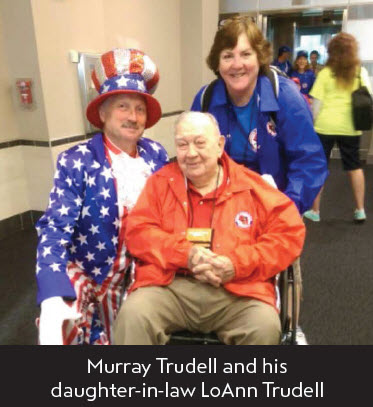 On Saturday, May 21st, the 23rd Badger Honor Flight (BHF) flew with 83 veterans and their accompanying guardians. A new milestone was crossed because BHF flew their 2,000th veteran. Veterans and their guardians were photographed in the terminal before they boarded. At the end of the flight, a homecoming including jazz band, bag pipers and Bucky Badger helped fire up the crowd and cheers rose as two of the volunteers ran through the crowd with a sign announcing 30 minutes to landing. Even louder cheers broke out for each of the veterans as they came down the escalator or were wheeled out of the elevator escorted by service members from the Air National Guard, Army National Guard Marine Corps League and other veterans in uniform.

Murray Trudell and Henry Semph, and their West Bend guardians LoAnn Trudell (daughter-in-law) and Nicole Knickmeyer (granddaughter) were on Saturday's flight. West Bend contributes the $500 guardian fee to accompany a parent or parent-in-law on these flights. Murray was asked what part he liked best - he said he liked it all. He could not believe how well they were treated by everyone involved as well as the public. He was so moved by the letters during "mail call" - the tears were streaming - for both us. A day neither one of us will forget!