A Giving Back Throwback

In 2019, we delivered treats to our local snowplow drivers. This throwback is very fitting with all of the snow we got this week. ❄️ ☃️
We love to give back to our community and our associates do too. It's one of the many perks of working at West Bend! 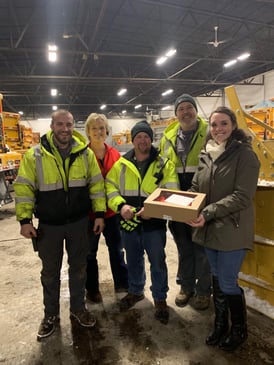 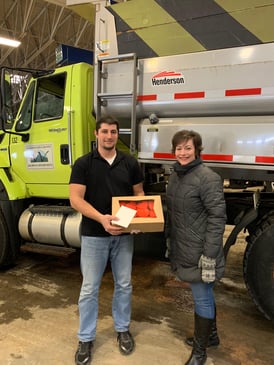 Linda began her career at West Bend in 1976 in the agent’s service department typing policies on an old- fashioned typewriter. After three months, she transferred to commercial lines casualty rating and has been there ever since. In the early years, Linda assisted with the calculation of commercial premiums using paper-rating manuals, desk calculators and sent the information to entry via written code blocks. In 1984, the PMS system introduced computer rating for two lines: WC and Auto simplifying the commercial lines process. Over the years, Linda held various positions moving on from a casualty rate clerk to premium audit supervisor, CL trainer, underwriting assistant, underwriter, sr., CL underwriter, staff underwriter (now known as product management), sr. regional sales manager-Southeastern WI, regional UW supervisor and presently regional underwriting manager. Her tenure with West Bend spans over 40 years of service. During her five years of service in the sales division, Linda was voted “Company Representative of the Year” by the professional insurance agent organization of Wisconsin for her customer service work in the insurance industry. “I have been given incredible career opportunities to personally grow with education and leadership throughout my career here at West Bend. Every day I still learn something new that is useful to the underwriting role. I have met and worked with so many incredible people, both inside and outside of the organization; many who I maintain close friendships with. I truly value the many friends I have made over the years and the associates whose careers I have affected through my leadership. “

Everyone Knows Her Name

Happy Throwback Thursday to Robin!  She's worked in the kitchen at West Bend since 1995!  Robin loves socializing with the other associates and makes everyone smile. Since 2000, Robin has been involved with Relay for Life. When not at West Bend, she enjoys painting and drawing. She generously shares her artwork with co-workers, who display it proudly in their offices or cubicles. She said, “I love West Bend and the people. They’re what make West Bend, West Bend. I love everything about them. They’re like family, always there for each other through good and bad."

Today’s Throwback Thursday is Jay! Jay began his career at West Bend in 1991. He’ll be celebrating his twenty-fifth anniversary in December! He’s held many roles over the years, which include casualty claim rep I, casualty claim rep II, sr. casualty claim rep, casualty claim examiner, sr. casualty claim examiner, applications programmer/analyst, sr. applications programmer/analyst, sr. software programmer, sr. application developer, configuration developer II, and his current role of configuration developer – senior. “I like that West Bend gives me opportunities to give back to society. By holding in-house blood drives, my blood donations are pretty automatic. The Habitat for Humanity Blitz Build weeks are a welcome break from the office and a great help to that organization. However, what I appreciate most is the support the company has given my wife and me over the 10 years that we’ve captained the Silver Lining Relay for Life team (American Cancer Society fundraiser).”

It's time for another Throwback Thursday! Annette began her career at West Bend in August of 1991 as a policy processing technician in Commercial Lines. She remained in that position until 1996 when she decided she needed a change of pace and went to the print shop. At that time, offset presses were still used so it was quite a change to go from wearing business attire and rating and assembling policies, to wearing uniform attire and working with ink. In 2001, she switched gears again, transferring to the Imaging Services area where she acquired various job titles, but the job itself remained much the same. Today, Annette is an imaging process support specialist and she works closely with Commercial Lines and Personal Lines Underwriting, Audit, Collection, Accounts Payable and Receivable, and IT. Annette tells us, “There have been so many changes these last 25 years. I remember typing forms with carbon paper and manually rating some lines of business, to now having everything electronic. Plus, the clothing trends have definitely changed. When I started, we had to wear full business attire with pantyhose and closed toe shoes! Now we can be ourselves and dress casually in jeans. The different positions I’ve held have definitely helped me understand the various departments. There is never a dull moment, but what I like most about working here is the people. I have formed lots of friendships over the years.”

Lynn has been with West Bend since 1990 where she started in the Records Department. She transitioned into personal lines policy supervisor and held that position for several years. Next, she was promoted to personal lines business process specialist and also worked on the process improvement team with various departments throughout the company. In March of 2008, Lynn joined the Marketing Department and she found the perfect fit. She started planning the meetings and events, and purchasing the company merchandise. "Although I never expected to be here for 25 years, I am thankful for all the opportunities given to me at West Bend. I have wonderful friends at this company, both retired and still here, and it has been a great experience for me." ‪#‎TBT‬ 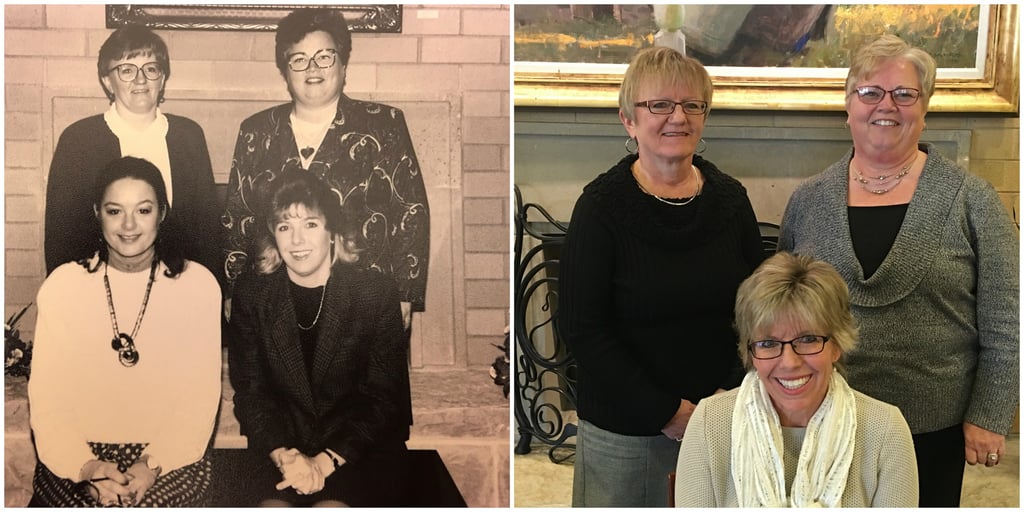 Meet Nel (left), Bonnie (right), and Lisa (seated).  The collective knowledge of this group of lovely ladies is amazing!  I can only imagine there are few companies that have this type of dedication and tenure.

Nel worked at West Bend part-time as a policy checker from 1978 to 1981. The hours were perfect since her husband could be home with their children and they didn’t need to hire a sitter. They moved back to Upper Michigan but returned in 1989. She began working once again at West Bend, this time in Personal Lines. Over the years, Nel worked in various departments - Commercial Lines, Accounts Receivable, the Help Desk in IT, Marketing, and now in the Executive area where she’s been for 16 years. “By working in several departments, I got a chance to learn a lot about each of them which helps me in the job I have today. I consider myself fortunate that I love what I do and I get to do it at such a great company! The job, the people, the benefits, the building, and grounds all make this a great place to work. It’s so nice to escort guests around our company and listen to their comments – they’re in such awe. I tell them we are very spoiled and we know it!”

Bonnie started her career at West Bend, also part-time, during her senior year at Kewaskum High School in 1974. Her first position was in what was called Agent’s Service (a typing pool). She then moved into the checking area (proofreading what was typed in Agent’s Service). “After doing this for a couple of years, I realized I was not going to quit and go to college, as was my original plan,” Bonnie said. “It was time to do something else. I applied for a position in the Rating Department and became a rater of homeowners and dwelling fire policies, and then an underwriting assistant.” West Bend’s president and CEO at the time convinced her to take some insurance courses, and before she obtained her Associate in Underwriting designation, she was promoted to personal lines underwriter. She’s been underwriting for 30 years in Wisconsin, Iowa, Illinois, Indiana, and Minnesota. Bonnie is currently a senior personal lines underwriter for Minnesota and Iowa. “While I regret not taking the time for college, I am happy to still be working here after 42 years. I truly appreciate the career opportunities offered to me by West Bend.  By far the best thing about working at West Bend is the people I’ve gotten to work with and to know over the years.”

Lisa started in Agent’s Service in 1986 and transferred to Personal Lines in 1987 where she held three different positions. When her daughter was born in 1998, chose to stay at home. In 2006, she returned to West Bend and to the same position she had when she left: assistant underwriter in Personal Lines. In order to have a bit more flexibility for her young family, she took a position in Office Services/Policy Assembly/Printing. She worked in that role until she was promoted to office services supervisor in 2009. Then in 2013, she took a position as a commercial lines policy processing supervisor because she was ready and excited to grow and learn more about other areas of West Bend. Lisa said, "I am very thankful for all of the opportunities West Bend has given me and I look forward to the future. I enjoy change and all the chaos that goes with it - it has been a great ride and I look forward to my future at West Bend." 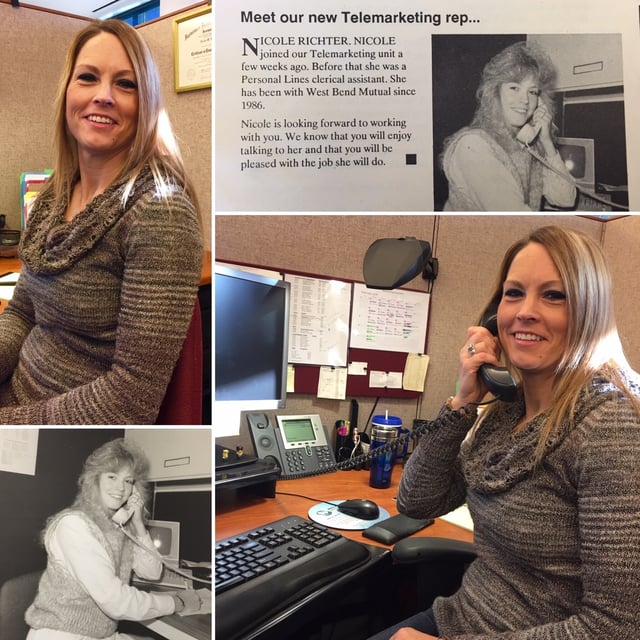 Nicole will soon celebrate 30 years at West Bend and she says, “It has gone by so fast!” She started her career in September of 1986 in the Staff Underwriting Department part-time through her high school co-op program. Then, after graduating early in January of 1987, she moved on to the Agent Service Department full-time. Afterwards, she joined Personal Underwriting where she stayed for 18 years and had three positions: set up associate, teleprocessing, and assistant underwriter. Desiring a change, she moved on to the Information Technology Department where she is currently a senior production support specialist with her main focus in Personal Lines, as well as learning Commercial Lines. “There is never a dull moment in IT and you learn something new every single day. This is such a great company to work for with all the opportunities and benefits that it has to offer. I have grown so much professionally and personally. Looking forward to being a lifer here at West Bend!” Interested in a career at West Bend? Click to view open positions!http://www.thesilverlining.com/careers ‪#‎tbt‬ 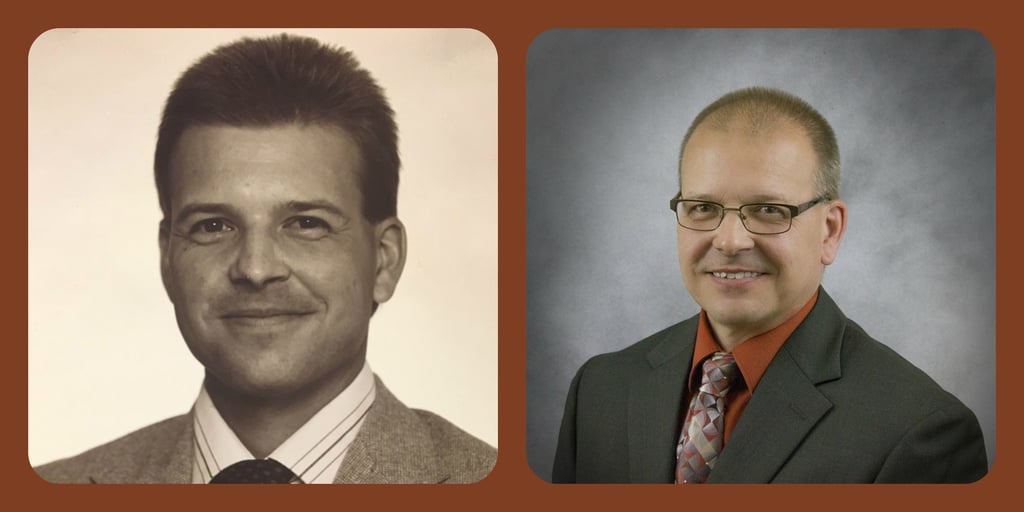 ‪#‎TBT‬ Happy Throwback Thursday! Meet Mike, who started in 1987 on the Commercial Lines Underwriting Wisconsin team. In 1991,he moved to Minnesota to do field underwriting and came back to the home office in 1996. He had an Illinois territory until 2006 when he moved back to the Wisconsin team. "Commercial underwriting has been a great career choice for me and I am very thankful for the opportunities and education West Bend has given me. I have made some good friends here. I have seen lots of changes, not only in where we are working, but in how we do it. I am looking forward to all the new challenges ahead." 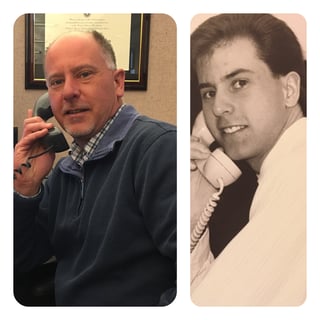 Brian started his career at West Bend in the Records Department as part of the high school co-op program in 1987. West Bend still continues its support of hiring students in this program. After high school, in 1988, Brian started full-time in the Agency Service Department. From there he moved over to the Personal Lines Department from 1989-90 and held positions such set-up associate, tele-processer, (Brian actually coined the name for West Bend’s Teleprocessing Department through an internal contest), then assistant underwriter and personal lines underwriter from 1995 to 2001. In January 2001, he switched gears and moved over to Commercial Lines as an underwriter, which is the position he holds today.

Brian shared, “I feel very fortunate to work for such a great company! West Bend has given me opportunities that have helped shape who I am today, both personally, as well as professionally. West Bend has great benefits, such as continuing education, which really helped me throughout my years here and will continue to help me in the future.”