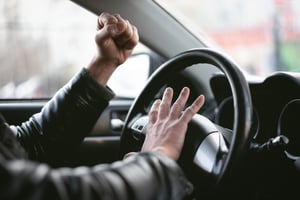 Many people have a mental image of an ideal driving experience. You know, those roll-your-windows-down and feel-the-air-on-your-face kind of days? Or maybe it’s something simpler like jamming to the beat from your stereo as you cruise the streets on your way to work.

Unfortunately, driving can be downright stressful on most days. And at times, it may get the better of you.

Getting impatient and frustrated while driving can lead to incidents of aggression, which can put lives in grave danger. Not only that, but it could also end up costing you a lot financially.

If you’re one of those people who are quick to anger when driving, you may want to assess yourself before getting behind the wheel again.

Here are eight signs of aggressive driving you should look out for.

1. You regularly drive over the speed limit or try to beat red lights.

Speeding puts everyone around you in danger – pedestrians, cyclists, passengers, and other drivers as well. In fact, data from the National Highway Traffic Safety Administration (NHTSA) shows that speeding is one of the major contributing factors to fatal traffic accidents.

There are days when you can’t help but be in a rush, like when you’re running late for work or an important appointment. But it’s another thing to drive like you’re eternally time-starved and living in the fast lane almost every time you’re behind the wheel.

2. You honk your horn often.

Horns are for alerting other drivers sharing the road with you, not for expressing anger. Observing proper car horn etiquette is vital to safe driving. Even assertive drivers only use the horn when necessary.

If you have a habit of laying on the horn in traffic or erratically honking out of frustration, you’re exhibiting one of the most common signs of aggressive driving.

3. You yell or use obscene gestures at other drivers.

Have you ever yelled or used obscene gestures towards another driver out of anger, especially over minor driving mistakes and traffic incidents? That’s another sign of an aggressive driver.

Things like red lights and traffic jams are out of your control, which means getting angry over matters like these won’t change anything. Even if another driver is to blame for the incident, yelling and cursing won’t solve anything; it’ll only escalate the situation.

Most aggressive drivers hardly yield the right of way to other drivers or comply with basic driving laws. They think it’s always their turn and grab any chance to overtake other vehicles.

If this is usually your mindset when driving, you may be an aggressive driver. Perhaps, it’s time you re-examine your driving behavior. Reckless driving won’t only lead to legal consequences, it also endangers everyone on the road.

In addition to not yielding, aggressive drivers are also prone to weaving. They always try to get ahead of other motorists by making frequent and unsafe lane changes or by cutting off other drivers whenever they see the slightest opportunity.

Do you spend much of your drive weaving in and out of traffic? If so, you’re probably driving aggressively.

Failing to signal is illegal and dangerous because it leaves other drivers guessing which direction you’re trying to go and may lead to an accident.

Aggressive drivers are always trying to get to where they need to go as quickly as possible. They’re predisposed to making last-minute turns and lane changes, which means that turn signals are often an afterthought for them.

Tailgating is when you’re driving too closely behind another vehicle. It’s a hazardous form of aggressive driving because there’s hardly any space between you and the car in front of you.

If the driver of the vehicle ahead slams on the brakes, you have very little time to react. In which case, you may find yourself involved in a car accident that could’ve easily been avoided.

Aggressive drivers tend to drive like they own the road and often exhibit selfish driving. They refuse to allow other motorists to merge or deliberately prevent them from changing lanes.

Giving way is one of the most basic courtesies you can afford other drivers sharing the road with you. Blocking traffic will only lead to dangerous situations and put people’s lives at risk.

How to Avoid Aggressive Driving

Recognizing the behavior is an integral part of changing it. One effective way to avoid aggressive driving is to not drive when you’re upset. Listening to soothing music also helps. And if you can, avoid the need to hurry.

Ultimately, the best way to ensure road safety is to become aware of your own actions. Keep calm and maintain your cool. Most importantly, don’t take the actions of other drivers personally.

About the Author: Lauren Bricks is the content specialist for Streetfighter Motorsports LLC, a family-operated car audio and accessory installation, sales, and customization facility located in Phoenix, Arizona. She loves cars and although she spends much of her week writing about them, she still finds the time to hop into the second-hand Corvette convertible her dad gave her for her 25th birthday and drive to the countryside with the top down.