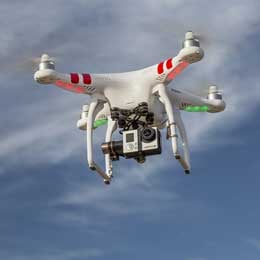 Drones or UAVs (unmanned aerial vehicles) have been getting a lot of media attention recently. Drones are aerial vehicles/ robots that can hover and are controlled either by remote or control systems from the ground. Amazon made drones mainstream in 2013 when they announced they were testing them to deliver packages. Today drones are used in many ways, including hurricane hunting and search and rescue missions. Farmers even use them to monitor fields. West Bend’s senior underwriter Sarah Faris will explain how a drone is covered on a West Bend Home and Highway policy®.

Drones for pleasure use have also become more popular since they’re relatively inexpensive. A basic drone can be purchased online for $300 or less. If you become the proud owner of a drone, do you know if or how your personal insurance policy would apply?

What if you crash the drone into your neighbor’s house, breaking a window? Or the drone gets a little too close to a neighbor’s child and injures them? Coverage would apply under the liability section of the homeowner’s policy. West Bend will not schedule a drone, however it would be covered as personal property, subject to the perils of the policy and home deductible. Drones used for business or other than for personal use would be excluded (for example, a realtor taking photos of a home or an Avon sales rep delivering packages).

Drones are very intriguing. If you own one or plan to buy one in the near future, be sure to familiarize yourself with the safety guidelines and rules.

Drones cannot operate over national parks, or near airports, military bases, and even some sports stadiums. For more information on the FAA regulations, visit https://www.faa.gov/uas.

If you are annoyed by your neighbor’s drone buzzing by your home, don’t shoot it. The article, “Don’t shoot that drone!” explains why.