A personal story. Seat belts save lives all year round 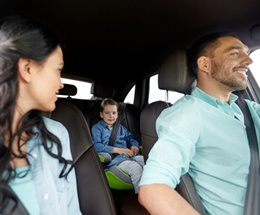 Too often in the news, we hear about people dying from their injuries because of being ejected from their car during an accident. In many cases, a simple click of the seat belt could have prevented these deaths from occurring.

Last December, I was driving home from work and as I got closer to home, the more slippery the roads became. After nearly sliding past my driveway, I managed to arrive safely. Because my daughter would soon be leaving work, I texted her a warning about the roads and asked her to be careful. She replied she would be. In typical Mother fashion, I watched for her arrival which seemed to take forever. Then my phone rang; it was my daughter. She flipped her car. After a deep breath, I asked if she was okay. "Yes," she told me. "I had my seat belt on and I am fine.” I was very thankful my daughter wore her seatbelt. While her car was a total loss, the seat belt saved her from injury ... or worse.

The next month, a young driver just recently licensed, stopped on the way to school to pick up a classmate. As they continued on, she hit a patch of black ice. She lost control of the car and hit a tree. While her passenger was wearing a seatbelt and was fine, the driver wasn't wearing hers. She was ejected from the car and died of her injuries. Her parents will always wonder why she didn't wear her seatbelt. Did she take it off when she picked up her classmate or did she just forget? Unfortunately, they'll never know.

The Center for Disease Control and Prevention reports that motor vehicle crashes are the leading cause of death in the first three decades of Americans' lives. More than half of the people killed in car crashes weren't restrained at the time of the crash. Wearing a seat belt is the most effective way to prevent death and serious injury in a crash.

During the summer months, roadways are busy and congested. Did you know that Memorial Day to Labor Day is considered the “100 deadliest days” for teen drivers? More time hanging out with friends and going to their summer jobs puts teens behind the wheel more often. Before your teen leaves home, remind them to buckle up.

Graduated licensing laws help remind newer drivers to buckle up. In addition, more people wear seat belts in states in which you may also receive a seat belt violation when pulled over for another offence. In states that fine people for not wearing a seat belt, even MORE drivers wear them. In addition, did you know that in many states, the driver could be ticketed if the passenger isn't buckled up? Therefore, if you're driving, make sure all your passengers are wearing their seat belts.

It's unfortunate that we need these laws and fines to get people to buckle up. Of course, you need more than a seat belt to keep you safe. We all need to follow the rules of the road ... obeying the speed limits, watching the lines on the road to prevent unsafe passing, slowing down at a yellow light and even stopping instead of speeding up. We all know what to do to be safe. So why does a tragic accident make us re-think our driving habits? Why are we always in such a hurry? Why do we always think it won’t be us in that accident?

Seat belts will always be one of the most important things you put on when you get in your vehicle.  Another important item is your paying-attention hat. Watch for distracted drivers and deer or other animals (in the country AND in the city), be prepared to stop for school buses, and above all, DO NOT look at your cell phone or text while you drive!

Remember: Be safe, be attentive, and remember to buckle up!