The dangers of drowsy driving 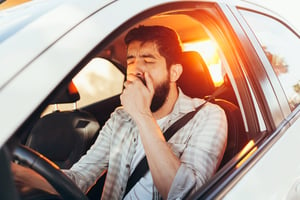 Few things are as bad as driving while intoxicated. Driving drowsy happens to be one of them. Drowsy drivers are impaired drivers, and that makes them just as much of a danger to themselves and everyone else on the road as drunk drivers.

In the United States, drowsy driving is a major concern. According to the National Highway Traffic Safety Administration (NHTSA), 795 people died in drowsy driving-related crashes in 2017. Even more worrisome are the findings of a study that says 30.8% of drivers reported having a hard time staying awake while behind the wheel, which means drowsy driving is more common than many people think.

Let’s take a look at the dangers of drowsy driving and some of the ways we can prevent it.

Driving under the influence (DUI) is punishable by law. DUI offenders face jail time, hefty fines, and in some cases, ignition interlock device installation. Check out facts about ignition interlock devices, and you’ll see how effective they can be at stopping drunk drivers from getting behind the wheel. On the other hand, drowsy driving isn’t a criminal offense in most states, and there’s no technology available yet to automatically prevent tired and sleepy drivers from starting the car and driving off.

However, drunk driving and drowsy driving equally pose a threat to drivers, passengers, and pedestrians alike.

Both drunk and drowsy drivers experience:

To further emphasize the similarities between drunk and drowsy driving, a study by researchers in Australia shows that drivers who have been awake for 24 hours are just as impaired as someone with a blood alcohol concentration (BAC) of .10, which is well above the .08 limit set by law.

The People Most at Risk for Drowsy Driving

While just about anyone who sits behind the wheel is in danger of dozing off while driving, the following are even more prone to doing so:

People taking non-prescription medications that cause fatigue and drowsiness like antihistamines and anti-emetics.

When on the road, always be on the lookout for signs that you’re driving drowsy, including:

Once you recognize these signs while driving, pull over to the side of the road immediately and take a rest. If you have someone else with you, have him or her drive.

The simplest solution to drowsy driving also happens to be the best one: get enough sleep. That’s at least seven hours if you’re an adult or eight hours per day for teenagers. Avoiding taking antihistamines and anti-emetics before driving is also a good way to steer clear of drowsy driving. And if you’re going on a long drive, your chances of staying awake while behind the wheel will be better if you have someone to talk to the entire trip.

Long drives also necessitate breaks from time to time, even when you’re not feeling sleepy. If you really need to go somewhere but you’re incredibly sleepy, ask a friend to drive you there, or you can simply take a cab or ridesharing service.

Like drunk driving, drowsy driving is highly preventable. Just follow these tips, and you can keep yourself and everyone else safe from the dangers of drowsy driving.

Author Bio: Lauren McDowell is the content marketing strategist for Interlock Install, a Phoenix-based company that performs installation, service, and removal for ADS Interlock. When not writing, she attends book clubs and enjoys reading stories to her kids.