The positive and negative effects of technology on children 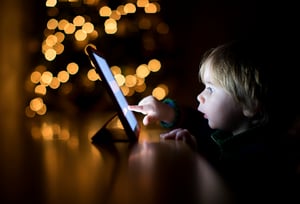 It’s no secret that technology has become an integral component of daily life. In particular, it’s become rare to see children and teens without a digital device in hand wherever we go: restaurants, waiting rooms, parks and more.

However, the rapid pace by which toddlers, children, and teens are adopting technology into their daily lives has many questioning the effects it can have on their development. Although the negative impacts of technology frequently hit the news and are popular topics of conversation, technology is also being used more and more in educational settings, like the classroom. This leaves many of us wondering: is technology all bad?

Here are a few positive and negative effects technology can have on children to consider:

Over the past few years, technology has become integrated into the classroom to enhance the learning experience for children. Technologies such as Smartboards, document cameras, Apple TVs, and even 3D printers are now incorporated into educational lessons to boost collaboration and engage students in the learning process. With increased collaboration in the classroom, teachers and students have increased creativity and project-based learning opportunities that make academic instruction more meaningful.

In addition, at-home educational technologies have assisted toddler-aged children in learning numbers, letters, colors, and other foundational skills before they enter formal schooling. Mobile device apps like Avokiddo ABC Ride, Moose Math, and Metamorphabet have been recommended by parents to introduce math, the alphabet, and even the arts before kids enter school!

Have you ever heard of the term “survival mode?” It’s a gameplay function in many kids’ video games where the player is tasked with staying alive as long as possible to outlast opponents. For example, in the popular video game Minecraft, players are dropped into new and different environments and must immediately build shelter and collect items like food, in order to survive and outlive their opponents. Not to mention, an entire day in Minecraft lasts just 10 minutes, so players must make good decisions quickly.

With these types of technologies, kids must work independently to achieve a specific goal. In the process, they’re posed with different types of roadblocks and challenges, which they must learn to navigate and overcome. In turn, they’ll be encouraged to come up with their own problem-solving solutions when facing real-life issues such as homework trouble, disagreements with friends, or personal hardship, as well as technology-based obstacles.

It’s common knowledge that our future lies in many of today’s emerging technologies. In the years to come, technical skills will be more important in the workplace, as well as the growing impact it’ll have on day-to-day life. One of the greatest benefits of exposing kids to technology is the fact that they’ll be well-prepared to jump into a pool of available, high-paying tech jobs.

With large tech companies like Amazon consistently adding hundreds of new jobs around the country, introducing technology skills to children at an early age can prepare them for a career with a positive outlook. Tech jobs are here today. Tech jobs will be here tomorrow. Some of today’s tech will be tomorrow’s tech, and some of tomorrow’s tech will be completely brand new and something our world has never seen before. Who’s going to be best equipped to fill those positions? The ones who start learning now.

As children use mobile devices more and more, they’re more apt to be virtually connected with family and friends, rather than spending time together physically; they’re more likely to text, chat on social media, or connect through online gaming than actually meeting them in person.

As Lisa Rai Mabry-Price, the associate director of school services from the American Speech-Language-Hearing Association (ASHA), told The Philadelphia Inquirer, “Social communication skills are also in jeopardy due to tech overuse. These skills are developed and honed through daily interaction and include knowing how to take turns during a conversation, using facial expressions, changing the way you speak based on the listener—such as how you talk to a baby versus an adult—and making appropriate eye contact. Such personal interactions are limited as children passively view a screen.”

The overuse of mobile devices can be harmful to children’s health, as the more they use mobile devices, the less physical activities they do. In addition, when children choose to play on their devices over physical activity, they often couple their activity with mindless snacking and other unhealthy habits.

As children spend more time in front of those screens—most of the time on the couch—the less time they spend outside playing, running, and burning off calories. Over time, those habits can lead to significant weight gain and other associated health problems.

A study from JAMA Pediatrics found that children and adolescents who use media before bed were two times more likely to not get enough sleep at night. Even further, having access to a media device in their sleeping environment, even if the device was not being actively used near bedtime, was also associated with an inadequate amount of sleep.

Children under the age of 13 typically require 11-14 hours of sleep, depending on their age. Sleep is immensely important for children, as it promotes growth, helps heart health, affects weight, increases attention span, and even boosts learning. However, when children don’t get the proper amount of sleep each night, these ever-important qualities can suffer.

Like many of the things children love, like pizza or candy, technology can be great—but only in moderation. The problems associated with technology come with misuse and lack of attention around how much technology is “too much.” Be sure to regulate and limit your children's technology use, and they’ll be able to reap its positive effects!

Author Bio: Marie Johnson is a contributor to Enlightened Digital, UX Designer and technology writer from New York City. If she's not writing her latest blog post in her kitchen, you'll likely find her strolling through Central Park, cappuccino in hand.